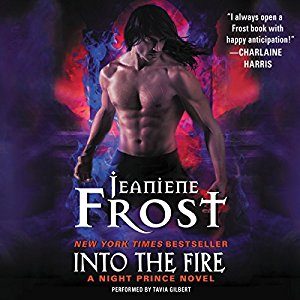 It’s been a while since I’ve listened to any of the titles in the Night Huntress Universe, and when I found out that Ms. Frost was wrapping up the Night Prince series with Into the Fire, I was quick to pick up a review copy. I honestly couldn’t recall what had happened to Vlad and Lelia until I started the book, and the narrator quickly filled me in.

The story opens about four months after the conclusion of the prior book. Leila and Vlad’s step-son nemesis, Mircea, are still magically linked so that harm and damage done to one is repeated on the other. Mircea is able contact Leila psychically, yet Leila cannot use her abilities to find Mircea. In the process of taunting Lelia, Mircea is kidnapped, and the abductees threaten to kill him (which would in turn kill Leila) if Vlad doesn’t do as they require. This ramps up the efforts to break the magic link between Leila and Mircea, leading Vlad and Leila to Ian for assistance.

While I started having issues with this series in the previous book, I wasn’t prepared for how much I would be annoyed by the two main characters. Leila is amazingly whiny. And her “dreaded inner voice” is annoying. Her life is hard, she whines, she cries, she accepts it, she rationalizes it, then we move on to the next issue. And Vlad is too far gone – too dark – to be an enjoyable romantic lead/hero. He is made of ice and vengeance, and while he cares for some individuals, he’d willingly kill those he cares about if it means keeping Leila alive. It’s taken to an extreme this time around. And the lies, which are rationalized, just make it so frustrating and annoying. It’s basically the same issues over and over again, and I had a very difficult time enjoying the book. Honestly, if Into the Fire wasn’t the last book in the series, I would have DNF’d in and moved on.

With that said, the last third of the book was much better than the front parts. Once the action started and the plot moved forward, it was exciting. I liked watching the group work as a team to bring down the bad guys. Ian was also a bright spot in the book – and what happened to him set up the possible next title in the Night Huntress Universe. I may listen to Ian’s book because I like his character. And if his mate is who I think, it should be a formidable match.

I have to say that Tavia Gilbert does an excellent job with Leila. She nails every whiny issue, breathless desire and so on… it’s just too bad that the character annoyed me so much. But I was able to separate out the performance as being perfect for the character. The other voices are consistent, although her Gretchen voice is annoying – but again, fitting of the character. Ms. Gilbert’s consistency and ability to capture the characters’ personality traits and emotions are why I rate her performance well, even though the material was irritating.

While I didn’t really enjoy Into the Fire all that much, ramping up the listening speed from 1.25x to 2x at the midpoint just so I could finish the book (I did slow it back down to 1.5x in the last 25% or so when the action picked up), I am glad I witnessed the wrap-up of Vlad and Leila’s story. (Although I wonder if it is truly the end as there are some unresolved issues remaining at the conclusion of the book.) Honestly, I think Vlad and Leila’s story would have been more enjoyable if it hadn’t gone on for four titles, but they aren’t my characters nor my creation. Overall, I enjoy the Night Huntress Universe, and I hope the Ms. Frost sticks to standalone romance titles for some of the remaining, unattached characters.

My Rating: C-
Narration: B

In the wrong hands, love can be a deadly weapon.

For nearly six hundred years, Vlad Tepesh cared for nothing, so he had nothing to lose. His brutal reputation ensured that all but the most foolhardy stayed away. Now falling in love with Leila has put him at the mercy of his passions. And one adversary has found a devastating way to use Vlad’s new bride against him.

A powerful spell links Leila to the necromancer Mircea. If he suffers or dies, so does she. Magic is forbidden to vampires, so Vlad and Leila enlist an unlikely guide as they search for a way to break the spell. But an ancient enemy lies in wait, capable of turning Vlad and Leila’s closest friends against them…and finally tearing the lovers apart forever.