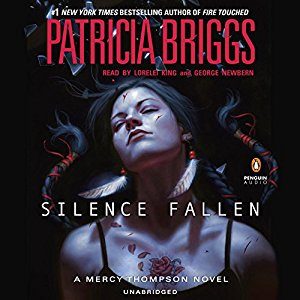 Opening shortly after the game-changing previous title Fire Touched, we find Mercy, Adam, and the Columbia Basin pack happy and settled in way they haven’t been in a very long time. However their good times are short-lived when Mercy is brutally attacked and kidnapped by Iacopo (Jacob) Bonarata, Lord of Night, head of the vampires. Mercy is cut off from her pack and mate-bond, on the run, and fighting to survive in a foreign land, while Adam must play diplomat to save both Mercy and ensure the security of his territory.

Silence Fallen is the tenth title in the amazing, richly developed Mercy Thompson series. Those readers/listeners who have followed the series since the start will probably notice the book has a different feel than previous titles in the series. First of all, Mercy and Adam spend almost the entire book separated from one another, similar to what happened in portions of the seventh title, Frost Burned. Additionally, due to the circumstances, the author has split the book into sections narrated in first person POV of Mercy (her normal method of storytelling), but also the book is shared in the third person POV of Adam (and very briefly another character). The book also goes back and forth a bit in time, with Mercy and Adam’s stories running parallel, but shifted slightly in timing. This all makes for a very different feeling book. The results are mixed in my opinion.

Overall, I enjoyed the story behind Silence Fallen. Ms. Briggs deals with the fallout from Adam and Mercy’s actions in Fire Touched, and even some subsequent titles. I like that there are repercussions from their actions, and that we continue to see the world changing as it uncovers and attempts to adapt to the supernatural world. Mercy’s kidnapping is a direct result of the actions in Fire Touched, and the outcome makes for a stronger pack in the long run. I also like that we learn more about both Werewolf and Vampire global politics. Mercy’s world has always been very small geographically, with trouble coming to her. Seeing Mercy function outside of her comfort zone was rewarding. I also loved watching Adam play diplomatic games, and getting his POV while it happens gave greater insight to how his mind works. With that said, I was slightly disappointed at the lack of time Mercy and Adam spent together. The stories are best when the pair works together to face and solve issues.

My biggest disappointment with the title is the addition of a male narrator for the parts of the book shared from Adam’s POV. While I understand the need for the dual POVs, and even like the idea, the new narrator did not work for me. Mr. Newbern is wholly new and NOT Lorelei King, who has narrated the series for the nine previous titles. Lorelei King is an amazing narrator, and she IS Mercy to me. She is also Adam, Stephan, Marcila, Ben, Elizaveta, Wolf, etc. So hearing someone else attempt “her” characters just didn’t work.

I will say that Mr. Newbern is a talent on his own, with a fine narrative voice, excellent accents, and I would enjoy listening to his work – just not here. Adam’s chapters are told in third person, not first person like Mercy, so it wasn’t even necessarily Adam relaying the events, and the story didn’t need another narrator. Part of the issue is that I enjoy Ms. King’s Mercy at 1.25x speed; however this speed didn’t work for Mr. Newbern’s Adam, and I had to switch to 1.5x for when his sections were played. Second, the newness of his voice, when I am so accustomed to Ms. King, was jarring and distracting. Initially, I spent more time analyzing his voice rather than focusing on what he was reading. It’s too bad that the publishers just didn’t have Ms. King narrate Adam. She has established his voice over the course of ten titles, and I have to ask: why change?

In the end, I enjoyed Silence Fallen, but it just wasn’t the same as the previous title (which was probably my favorite), mostly because I wanted more time with Adam and Mercy together. The story was solid, and I love that the author considered the fallout from previous events when developing the story. There was a twist at the end that caught me completely off guard, and that rarely happens. It made me want to listen to certain exchanges again to see if I should have picked up on something sooner. Unfortunately, I did not like the addition of a new narrator, and it ended up bringing down the entire listening experience for me. However, the book is very good and the series is one of the best out there.