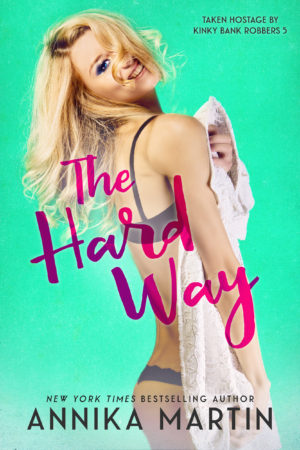 NOTE: Although each story in the Taken Hostage by Kinky Bank Robbers is standalone, the romance of the four main characters has developed over the course of the series, with deeply emotional roots and revelations along the way. Additionally, the events in prior books impact the events in this book. For these reasons, I do not suggest starting the series with The Hard Way. The first book in the series, The Hostage Bargain is currenly free!

The story opens with the God Pack honeymooning in Rome for the past month. Although they know they cannot stay for long in one place, and in fact had to give up so much of their normalcy in escaping ZOX, the gang indulges in daily routine and the temptations of Rome. However, when Isis learns that her sisters’ farm is in trouble and her eldest sister, Vanessa, is charged with manslaughter, the guys whisk Isis back to Wisconsin. Investigating the alleged crime incognito, the gang promises to save Isis’s family.

There is so much to love in this series, and The Hard Way is another wonderful addition. First, the title’s opening sex scene (there is certainly more than one!) is one of the dirtiest yet in the series. And even when the guys are worshipping their goddess, the author always finds ways to slip in her amazing, dark humor. I just died when Thor asks “Um, did you guys just have some sort of mystical butt-f**king experience?” The timing of Ms. Martin’s offbeat humor is always impeccable. I think I laughed out loud every time the group found themselves in the cupid-infested B&B. Loved. It.

Next, The Hard Way is emotionally satisfying. Although every book centers on the foursome and their deepening love and commitment, each title tends to focus a little bit more on one of the characters, and in this light, I would say The Hard Way is Odin’s story. But you can’t think of this series as one that has a beginning and end point for each character. While the story looks deeper into Odin’s time as a captive, he’s not suddenly “cured” of his horrors by the end of the story – not even close. However, we witness tremendous growth in the relationship between Isis and Odin as she gets him to open up. She comes to understand that no matter how much she wants to help him, Odin’s nightmares won’t ever end. But she shows him that his sacrifices weren’t all dark – his world is full of gray. The back and forth between the pair provides both heart wrenching and yet oddly comforting moments as they give of themselves out of love. 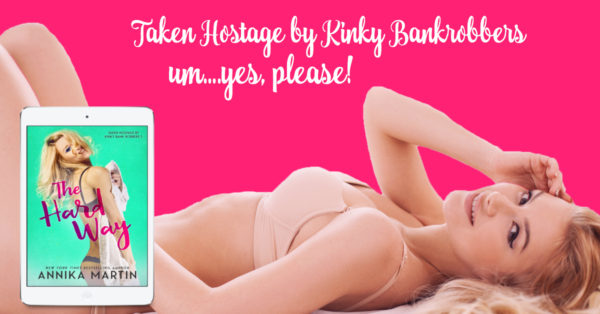 Additionally, I loved watching the gang piece together the clues and figure out what happened in the mystery surrounding the salmonella outbreak. Sure, two of the God Pack are former spies and have mad investigative skills, but even Isis notices how she too has learned a thing to two about uncovering clues. They work great together, balancing and supporting one another to discover the whole picture.

Finally, there are some teary-eyed moments as Isis revisits the sheep farm and all she left behind. Being back in her hometown not only causes Isis to relive past events, but forces her to deal with the decisions she made, and is still holding to, when she joined the God Pack. There were a few times I found myself sniffling (okay, even sobbing) as Isis takes her journey home.

In the end, I love the Taken Hostage by Kinky Bank Robbers series hard. I take great delight in how much the characters have grown over the course of each book. I love that they care about each other so much, and how they express it. Most of all, I love that the author will allow these guys to be dark, yet their mutual love protects them from going too far. Taken Hostage by Kinky Bank Robbers series is outlandish, yet brimming with emotional depth and intelligent plots  The titles are sinful and hot, but rooted in genuine love and compassion.

The Hard Way adds much to this amazing series. Not only did I enjoy the mystery and watching the gang solve it, but I loved how we learned more about Odin and coming full circle back to Isis’s town. It was satisfying to have the introspection of how there lives have changed over two years.

The gang is in full vacation mode, and Isis has never been happier…until tragedy strikes the farm she had to leave behind.

People are dying. The farm is in trouble. Her sister might be sent to prison for something she didn’t do.

Isis is desperate to help, but how can she? It’s too dangerous for her sisters to find out she’s still alive, too dangerous for the gang to return to the scene of that crime. At least that’s what Thor and Zeus think. But Odin’s nightmares are back. And he has other ideas…and those ideas might be more dangerous than anything.