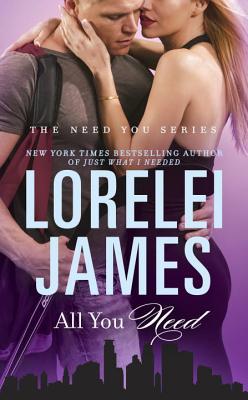 All You Need
Author: Lorelei James
Reviewer: Jen
Rating: A

Annika Lund has an Ice Queen reputation because she works hard for her family’s company, always doing what is best for the family, even if her personal life takes a back seat. But until she started spending time with Axl, she hadn’t been with a man who was worth the distraction. Now she’s found a guy who matches her word for word and makes her toes curl in the process. If only she could share it with others.

Axl Hammerquist is much more than the handsome, rough, playboy hockey player he portrays, but why let anyone see the real man when they don’t expect anything more from him? However, when his agent insists on a public image makeover, it is his attraction to and respect for Annika that gets him to change his mind. So when his agent decides it’s time to publicly end Axl’s PR relationship with Annika, he realizes he’s in way more than he ever planned.

All You Need is a wonderful, feel-good romance that hits all the right notes for me. Axl and Annika are equals from the start, and while there is some minor jockeying for position, their relationship isn’t a power play struggle for dominance. I admire that both have serious careers and neither has to compromise his/her work ethic or ambitions, rather, both support the other along the journey.

But their story is far from all work and no play! The couple starts off on the wrong foot, as Axl drives to challenge Annika’s PR abilities, causing trouble just to see how she’ll react. He recognizes her intellect and admires her strength, and he has fun creating situations for her just so he can watch her work. Their silly name calling and hockey puns give rise to entertaining conversations. Equally enjoyable is their mutual attraction which creates wonderful sexual tension.

While there are several things that worked for me in the title, it’s the fact that once Annika and Axl became a couple, they stayed a couple, that made their story shine. Although these two alphas butted heads at the start, they were upfront not only about their issues with the other, but their mutual attraction as well. Yes, they did try to fight the sex appeal, creating wonderful sexual tension and moments of witty banter, but they both recognized right away that they weren’t going to be able to keep this PR relationship strictly platonic. Both characters are honest and upfront about their mixed emotions, and both are such genuinely good people beneath the surface that they work well together. And due to the circumstances that drove them together, they become an “us versus them” team, sticking together despite or rather because of what others say to them. The more time the pair spent together, the closer they grew.

By no means is their journey a smooth road to happily ever after. They come across road blocks and difficulties, issues that in other titles have caused breakups and mayhem. But it’s how the couple handles the bumps that makes their story so amazing. Rather than allowing external factors best them, they were patient, communicated openly, and worked through the problems.

All You Need is a wonderful romance about two equals who go from coconspirators to friends to lovers. I admire that both Axl and Annika possess honorable fortitude and genuine hearts, sharing of themselves with one another. Their journey is an enjoyable ride, and I look forward to discovering what is next for the Lund Family.

PR agent Annika Lund can spin any disaster into a win. But revamping the reputation of a notorious Swedish hockey player will take every trick in her arsenal, especially when his agent insists that convincing everyone he’s no longer a playboy is top priority. And that it requires a sham relationship—with Annika playing the part of loving girlfriend.

On fire in the rink and in the bedroom, Axl Hammerquist couldn’t care less about being anyone’s golden boy. So when his agent forces him to play nice with a new publicist, he takes satisfaction in being as much of a pain as possible. But the more time he spends getting to know Annika, the more Axl starts to think that being Mr. Nice Guy might be worth it if it gets him the girl…