Posted March 8, 2017 by B. in Rating A, Reviews, Sci-Fi or Fantasy Fiction, Urban Fantasy Tags: Anne Bishop, Bs-review, ROC, The Courtyards of the Others, The Others series 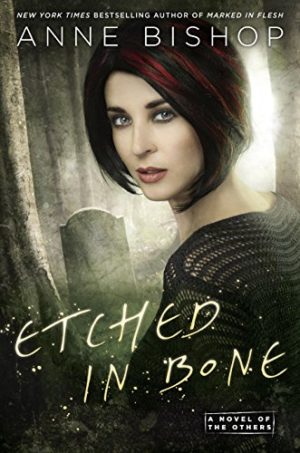 Etched In Bone
Author: Anne Bishop
Reviewer: B.
Rating: A-

After surviving the recent devastation that was brought down on the city of Lakeside by oldest and deadliest of the terra indigene, Meg Corbyn, along with the other residents of the Courtyard, has been busy adapting to the new version of the world that remains. Compared to the rest of the continent of Thasia, they’ve been lucky. But, simultaneous visits from both an unwanted human and the Elders just might turn an already delicate balance into something deadly, and even “Namid’s teeth and claws” must learn that everyone has a price to pay eventually.

Regardless of the themes that have been explored by The  Others stories, it has always revolved around the two main characters, Meg and Simon. Etched in Bone brings their mutual journey to a satisfying, if gratifyingly predictable, close. What began as an entertaining and antagonistic friendship has deepened into something far sweeter, and I’ve enjoyed the evolution a great deal.

While there are many thoroughly fascinating characters in this series, I felt that the real standout in Etched in Bone is Captain Montgomery’s mother, Miss Twyla. Officially introduced in the previous book, Marked in Flesh, she is the Courtyard’s stern, loving “Grandmother”—and elder of the human pack—and everyone (most Others, included) rightly defers to her judgment. Like the shifters, she is able to make tough choices for the benefit of the whole Courtyard, regardless of the cost to herself. I think my favorite thing about her, however, is that she knows the difference between kindness and pity, and, by putting that conviction into practice, leaves no question about which will leave the recipient’s dignity intact.

Part of the fun of these novels for me has always been the suspense that exists, despite having a main character with the “gift” of prophecy. Even with Meg’s ability to see the future, along with the multiple POVs the author uses throughout, I was still unable to do much more than wait for the bad things—which seemed to accumulate—to happen just as the other characters involved did. As a result, I found Etched in Bone especially difficult to put down during my initial reading.

As has been the case with the other novels in the series, Etched in Bone is a lesson in consequences. Whether they are the result of random decisions, Meg’s prophecies, or the “irreproachable” will of the Elders, every choice made by both humans and Others causes repercussions that are felt by them all. From the very first story it was predicted that Meg’s presence would change things for those living in the Lakeside Courtyard, and here we finally see just how true that is.

Though not completely free of difficulties, this series has been a favorite of mine since the first book, and Etched in Bone is no exception. Filled with suspense, humor, a villain so inexcusably toxic that there’s no way anyone could possibly justify his motives, and a touch of romance, it is an apt conclusion to the series so far. It’s been a pleasure to get to know the residents of the Others’ world, and I’ll keep these books close enough for a reread for a good while to come.

After a human uprising was brutally put down by the Elders—a primitive and lethal form of the Others—the few cities left under human control are far-flung. And the people within them now know to fear the no-man’s-land beyond their borders—and the darkness…

As some communities struggle to rebuild, Lakeside Courtyard has emerged relatively unscathed, though Simon Wolfgard, its wolf shifter leader, and blood prophet Meg Corbyn must work with the human pack to maintain the fragile peace. But all their efforts are threatened when Lieutenant Montgomery’s shady brother arrives, looking for a free ride and easy pickings.

With the humans on guard against one of their own, tensions rise, drawing the attention of the Elders, who are curious about the effect such an insignificant predator can have on a pack. But Meg knows the dangers, for she has seen in the cards how it will all end—with her standing beside a grave…