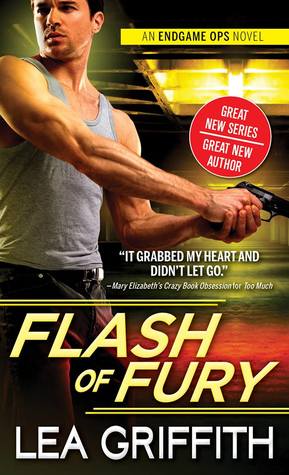 Kingston McNally, ex-Navy SEAL, is the leader of a black ops team known as Endgame Ops. A year ago on a dangerous mission in Beirut, King’s group was betrayed by one of their own. Now it’s his mission to end Horace Dresden, the man responsible for the death of his teammates. However, someone has put Allie Redding in his path and her safety is quickly becoming his number one priority.

Allie Redding spent the past few years as a Peace Corps volunteer in Africa and is looking forward to a mani/pedi and McDonald’s french fries back at home. She’s instantly attracted to the hottie in the seat next to her, and she even indulges in a little “what if” daydreaming. But her fantasies are short lived when her plane is hijacked by the terrorist group, Boko Haram. Now she and her new found ally, King, are on the run while trying to figure out who they can trust.

Flash of Fury is the first exciting story in Ms. Griffith’s Endgame Ops series. The story opens with a bang and never EVER slows down. As the first book in the series, the author spends a great deal of time introducing the key players and laying the groundwork for the world. Generally this is handled well in Flash of Fury, but I did get lost a few times; partially because of the volume of information, and partially because this material is just the framework for something larger to which I am not yet privy. While I liked that the author didn’t dumb down conversations for the reader, it made it difficult to follow along as there is a lot of subterfuge and layers of conspiracy in play.

The overall plot line of the book is the rescue and return of Allie to her father in the U.S. It’s a good story, but there is entirely way too much running for my tastes. Seriously… every time King and Allie make it to a safe house, they are compromised. It got old after a while; I just wanted them to have a respite that lasted longer than a couple of hours (they actually do but injuries don’t count in my book!). The larger story involves weeding out the leaks that lead to the botched mission in Beirut and how it all ties in with Allie. There was significant movement on this front, but I have to say I was disappointed in how the book ended. Without spoilers, I will just say that Allie’s actions towards the end of the story seemed highly careless in light that King’s operations is a Black Ops — off the record — team.

As for Allie and King – I liked the pair. The author builds tremendous sexual tension between the pair, which is compounded by their constant upheaval (although as I mentioned, that did get tiresome after a while). And although I’m not a fan of insta-love, I can get behind the couple. I admire Allie’s honest and willingness to selflessly protect King and his team. She understands King and is willing to be there for him, but that doesn’t mean she’ll just sit back and let him tell her what to do. I also love that the jaded King finds solace in Allie’s positive, cheery demeanor.

In the end, I enjoyed Flash of Fury. I wanted to love it more, especially after the explosive beginning and the amazing sexual tension between the pair. However, there was just one or two too many chase scenes. I grew tired and weary of the constant betrayal of their location and the need to be uprooted and on the run. Additionally, the layers of subterfuge were too many, and I hated not being able to see the bigger picture. Something huge is going on, and I feel that we weren’t given enough clues to try and start to see that. Also, I felt that Allie’s actions once she gets stateside were reckless. I wish she’d found a different way to let King know her feelings. But Allie and King made a fantastic romantic pairing, and I am completely engaged in discovering more about Endgame Ops and its team.

Their spark is immediate

Kingston McNally lost men when someone betrayed his team, and now he’s out for retribution. His quest for the enemy’s courier leads him to Cameroon and Allie Redding, a petite Peace Corps volunteer as stubborn as she is brave. Their attraction is immediate, but Allie has secrets of her own…and she’s not giving them up easily.

But their secrets could burn them both

Allie’s life has been spent hiding in plain sight, but she’s had enough of her cloak-and-dagger existence. On her way home, her plane is hijacked-and King saves her life. But that doesn’t mean she owes him anything…even if he is the most damnably sexy man she’s ever laid eyes on. He’s got black ops and secrets written all over him, and trust is a two-way street.