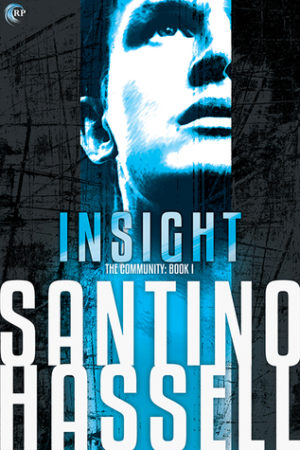 If being raised in the intolerant, judgmental suburbs of Houston, Texas hadn’t been difficult enough, Nathaniel Black also had to bear the stigma of his family’s name. Though most of them are “gifted” with varying psychic abilities, they are better known for the resulting mental instability, addiction, and suicide that seem to accompany those talents. Nate would rather just avoid them all as much as possible. But, when the death of his identical twin brother, Theo, is labeled a suicide, Nate will do anything to discover the truth, even if it means embracing the very thing he hates most.

Having read many of this author’s other titles, I’ve been very excited about Insight for quite some time. Not surprisingly, to say that I enjoyed reading it would be an understatement. While I’ve liked many books in the romance and paranormal genres, I simply can’t resist a good suspense or mystery story, and Insight kept me on edge from beginning to end. In fact, there was so much going on in this story, that this review has to be fairly limited in an effort not to ruin it.

One of my favorite things about Insight is that, although there are many layers in the plot, I didn’t feel overwhelmed by a profusion of obvious distractions, which can sometimes be problematic with stories that combine elements of multiple genres. Despite the very “busy” nature of this story, however, every scene appeared to be deliberate, if not economical, in its implementation, while consistently providing enough rich detail and imagery that immersing myself in the narrative was effortless.

While Insight should certainly be categorized as “Suspense” or possibly a “Thriller,” there’s no denying the significance of its romantic elements, as well. I found both Nate and Trent to be equally likable, and thought the complimentary nature of their developing relationship fit the story very nicely. Nate’s journey is one of self-acceptance as much as it is about discovering the truth, and watching him learn that he truly can be loved was a highlight of the novel for me.

Overall, I think Insight is a finely-crafted exploration of a world where truths and monsters dwell beneath the skin. Nate is an intriguing protagonist, and he and Trent each won me over with little effort from the very first chapter. The many twists and turns proved to be consistently riveting, the tension building to the point that I was literally unable to put the book down. So far, I believe this series is off to a wonderful start, and I can’t wait to get my hands on the next one.