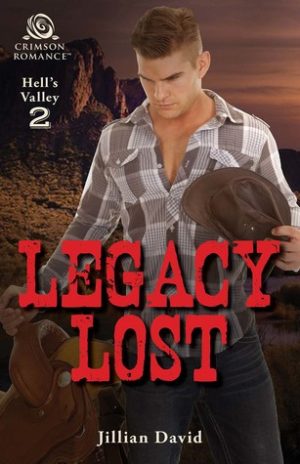 I was excited to find that the second novel in the Hell’s Valley series would be Shelby and Eric’s story.  With Shelby’s potent ability, I wasn’t sure how she would find a happy ending with anyone.  Though there were pitfalls, I did enjoy their story.

Both Shelby and Eric are very strong personalities. I wasn’t sure how they were going to make their relationship work in a healthy way. With Shelby’s empathic abilities, I didn’t think she could make it work with Eric. Though I did like how they tried to communicate with each other, they did sometimes run hot and cold. That being said, it was true to their personalities, and I enjoyed watching them grow and try to figure out how to make it work. Eric’s ability to compartmentalize seemed to be what could help them, though I liked how (realistically) no one could keep all their feelings and thoughts bottled up. Without giving anything away, I liked how the ending wasn’t a miracle, “every thing is fixed” conclusion. There will still be challenges, but the fact that they are going to be stubborn together is the “big red bow”.

Though Shelby and Eric’s journey was strong and gripping, I felt a bit lost with what is going on with their neighbors, the Brands. It is implied that the threat is demonic, and I wonder at the connection to the Brands and how it will eventually play out.  With the introduction of a new couple to help at the ranch, I hope in the next novel we will learn more about what seems like an ancient feud.  I was happy that the lost eldest brother (Vaughn) has returned.  It appears his story may be next and I can’t wait to learn more about him and the tension between Vaughn and the emergency room doctor.

Overall I liked Legacy Lost, the second novel in the Hell’s Valley series. Though Shelby and Eric could run hot and cold, the story was true to their personalities, and I loved how they found their common ground.  I continue to be intrigued by the dark demonic plot and hope to learn more in the next novel as well.

Growing up as an honorary Taggart, Eric Patterson found the family he’d always wanted. Almost. He couldn’t ever manage to see the clan’s youngest and only daughter, stubborn spitfire Shelby, quite like a little sister. Suddenly, his long-suppressed feelings are determined to come to light.

Too bad Shelby’s cursed. Her double whammy psychic powers to read emotions and locate anyone anywhere have always made relationships impossible—and now they’ve begun to endanger her life. If she uses her echolocation skills again, it just might kill her.

But when a malevolent supernatural force invades the valley, threatening the Taggarts and their neighbors, the Brands, Eric and Shelby must contend with both their blossoming feelings and the increasing danger. Does Shelby dare risk using her powers one more time, sacrificing her own life to save Eric?

Reviews in the Series:
Legacy of Lies by Jillian David (Hell’s Valley #1)