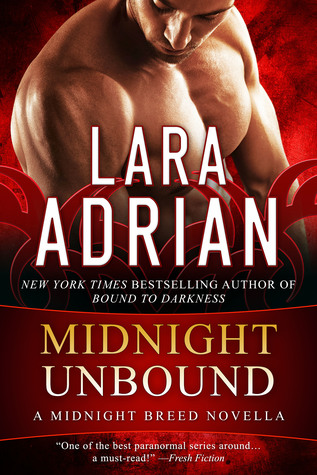 A loaner and one of Dragos’s Hunters, Scythe doesn’t belong among humans or his own kind. Yet when his brother, Trygg, requests his help, Scythe agrees to protect Chiara Genova and her young son.

Chiara’s life has been filled with danger ever since marrying her now deceased mate. When a crazed Breed breaks into her home and threatens to force her blood bond, the Order realize there is more going on than appears and send in the one male they trust to protect her.

The story of Chiara and Scythe actually begins in the previous novella, Midnight Untamed, when the pair meet and sparks are evident. Midnight Unbound completes their story as the pair is once again tossed together in a deadly situation. This time around, the pair are forced to spend days together, alone, and after a week, they can no longer deny their burning attraction and physical needs.

Midnight Unbound is an entertaining, straight-forward paranormal romance. Predictable maybe, but enjoyable certainly. He saw her and longed for her. She saw him and wanted him. He’s tender and caring under his tough exterior. She isn’t the fragile flower she appears to be. After being cooped up together for a week trying to fight their attraction, bam… sexual explosion and uncovering of feelings. Sharing of pasts. Working together for a future.  Midnight Unbound can be read as a standalone, although the general Breed background mythology may make it more enjoyable. I liked the straight forwardness of the tale and enjoyed the tie into the previous novella.

A lethal Breed warrior is called upon by his brethren in the Order to bodyguard a beautiful young widow he’s craved from afar, in this new novella in the “steamy and intense” (Publishers Weekly) Midnight Breed vampire romance series from New York Times and #1 international bestselling author Lara Adrian.

As a former Hunter bred to be a killing machine in the hell of Dragos’s lab, Scythe is a dangerous loner whose heart has been steeled by decades of torment and violence. He has no room in his world for love or desire–especially when it comes in the form of a vulnerable, yet courageous, Breedmate in need of protection. Scythe has loved–and lost–once before, and paid a hefty price for the weakness of his emotions. He’s not about to put himself in those chains again, no matter how deeply he hungers for lovely Chiara.

For Chiara Genova, a widow and mother with a young Breed son, the last thing she needs is to put her fate and that of her child in the hands of a lethal male like Scythe. But when she’s targeted by a hidden enemy, the obsidian-eyed assassin is her best hope for survival . . . even at the risk of her heart.