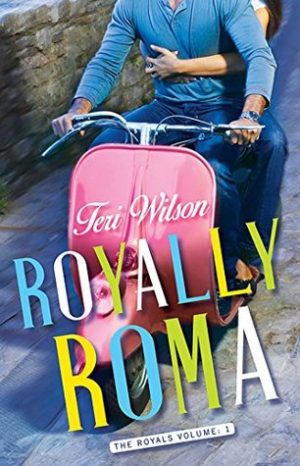 I was super excited to read Royally Roma. It’s advertised as a retelling of the classic romance Roman Holiday – a movie I ADORE!!!!!  It’s clear the author loves Audrey Hepburn as much as I do and that she has a major crush on Prince William, which I can totally respect—I mean he’s a cutie pie. But I felt like rather than work with the romance & chemistry that Roman Holiday offers, Ms. Wilson relies way too much on sexual references. I understand that Julia and Nico have massive chemistry. That is clear from the open scene when he’s lying asleep and naked in her bed, but I felt like much of the story was missed because they were so caught up in the heat that was between them. References to her pert, round bottom and his arousals were plentiful, but I felt like they weren’t necessary. I mean, I understand that we are dealing with a couple hot and horny millennials; however, I feel like a well placed kiss and a side-long glance, at least in a few places would have relaid the same message as him needing to adjust his expensive trousers to hide evidence.

I’m sorry, maybe I’m a bit old-fashioned, but I feel like sex in a story should be like sprinkles on a cupcake. They offer, color, texture, maybe a little flavor, but no one wants to bite into a cupcake filled with hard, crunchy, weak-flavored sprinkles that distract from the fun & flavor of the cake and frosting.

Royally Roma had some great cake and frosting to offer along side of some seriously beautiful scenery. Ms. Wilson does an AMAZING job describing Rome. The dialogue both inside the main characters’ heads and between the pair is fun and witty and lets us see a side of Nico we’d all like to see of Prince William. But overall, the book relied so heavily on sex that I missed the story for the sprinkles, and that’s a bummer because Roman Holiday really is a wonderful and classic story.

In this charming, modern retelling of the classic Audrey Hepburn film Roman Holiday, a royal prince tries to escape his hectic and rigid life and ends up leading a young graduate student on a chase through the Eternal City.

Julia Costa is too busy trying to complete her PhD while also holding down a full-time job as a private tour guide in Rome to keep up with celebrity gossip. So when she crosses paths with a real, actual prince, she mistakes him for a client and takes him on a daylong tour of the city.

Intrigued by the idea of spending time with someone who obviously has no idea who he is, and delighted at the prospect of a day free of royal obligations, Niccolo La Torre, Crown Prince of Lazaretto, acts on impulse and assumes the role of Julia’s client. He swears to himself that he’ll return to his royal duties after only half a day…but he’s having the time of his life.

Until Julia presents him with the bill. Since he snuck out of the hotel without so much as a dime, he tries to escape, only to discover that she won’t let him out of her sight until he can pay her back. She’s determined to get her money…and perhaps more from the handsome stranger she’s fallen for.