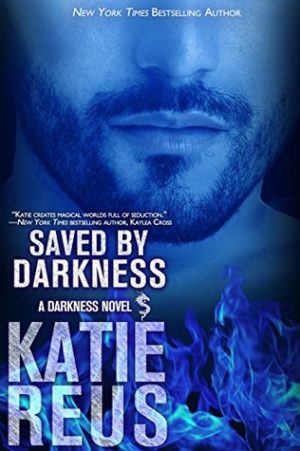 Saved by Darkness is the sixth title in Ms. Reus’ entertaining paranormal romance Darkness series. This traditional PNR features a wide variety of shifters, vampires, demigods, and demons, each with a happily ever after. While each book is a standalone romance, the characters and mythology have been developed over the course of the series, making it a richly detailed world, one which is best experienced from the start.

This time around the story focuses on half-demon, half-dragon shifter Ian, whom we met a couple books ago. He fell in love with dragon shifter Fiona over fifty years ago, but she walked away from him and mated another in order to protect him from her family. Yet it’s been discovered that she’s been running a preternatural shelter for abused paranormals at the edge of Finn Stavros’s territory, a place Ian has come to live in recent months. Now that Finn is reaching out to Fiona, can Ian give her up a second time?

Right from the start, I found myself fully submersed in Fiona and Ian’s story. First, I enjoyed the flashbacks to the couple’s initial meetings and early connections. Even though the reader knows the outcome of their past, it’s lovely to see how they fell in love, while running parallel to their reunion. Second, I adore how heroic and strong Fiona and Ian are, both in their mutual pasts and in current day. They each have a formidable moral compass, coupled with the need to protect those they love. Yes, a bit of maiming and killing of enemies is sometimes necessary and definitely a-okay!

Fiona and Ian’s attraction and love runs deep. Demonstrated through the flashbacks to their initial meeting, we learn that they have a love-at-first sight relationship that developed quickly. This makes their reunion so much sweeter, knowing that they have experienced an unfulfilled love for over fifty years. The author does right by the pair by allowing them to express their feelings for one another early on in their reunion, rather than drag things out or keeping up pretenses. The impact is that I cheered even harder for the pair to make it through the trials they faced.

Even though the love story is the most prominent part of Saved by Darkness, the couple, along with Finn’s werewolf pack, must deal with a new threat uncovered while making connections with Fiona. Some unknown “big bads” have created a new drug that will kill humans. This sends a group, including Fiona and Ian, into a hell dimension to uncover the plot. Additionally, Fiona is attacked with the drug, which appears to be fatal, giving the group some urgency to uncover the ingredients and find a cure. While the action is exciting and allows the couple to experience some emotional stress, the culmination and conclusion felt a bit too easy. However, that didn’t impact my overall enjoyment of the book.

In the end, Saved by Darkness is one of, if not my favorite book of the series. The author has found her groove and creates exciting tales. The balance between romance and action is ideal, and I love that the characters continue to play important rolls in the books even after they get their HEAs. I look forward to more, especially with the strong hints of the next (?) paring!

He thought he lost her decades ago.

Half-demon, half-dragon shifter Ian McCabe is hellbent on getting back the only woman he’s ever loved. When Fiona O’Riley kicked him out of her life decades ago, he thought she was gone for good. Now that she’s back, nothing will stop him from claiming her. But she wants nothing to do with him—or his family.

She’ll do anything to save him.

Fiona knows that Ian is the only male for her. The only way to keep him alive is to stay away from him. But when tragedy strikes and they discover a wicked agenda for the mass murder of humans, they must work together to take down the enemies that threaten everyone. But there’s so much more on the line. As their undeniable desire intensifies, they’re faced with an unbearable choice. If Fiona and Ian succumb to their temptation, mating could be the last thing they ever do.