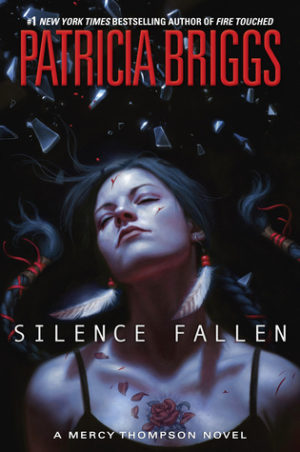 As complete and utter Mercy Thompson fans, suffice to say we loved Silence Fallen.  However, it was a bit different, not only where the story goes, but in the telling.

Adam and Mercy have come a long, long way.  They are an awesome team.  But a lot of time has passed since Mercy has had to truly face trouble on her own.  In Silence Fallen, Mercy does just that.  She is abducted and held against her will in another country.  As she strives to escape, Mercy finds herself from one hot pan into another.  We really enjoyed how she is still able to survive on her own.  But it was tempered in her desire to not only return to Adam and the pack, but to ensure they knew she was okay.  Her unwavering belief that they would come for her gave her the extra courage and determination to survive.  It was awe-inspiring to watch her survive but still remain true to herself.

What is different in this novel is that the novel is told only about half from Mercy’s point of view, with the rest told from Adam’s.  What makes this tricky is that the timelines overlap.  We understand they whys, but still feel that the chapters could have been spliced a little differently so the timeline did not jump around as much.  That being said, make sure to read those little musings at the beginning of each chapter….they really do help ease the affected flow of the story.

As always, this novel was a gripping read.  There is so much we always want to talk about but can’t because we’d hate to spoil this great novel for all of you.  However, at the end there are a couple revelations which are surprising.  What Gikany and Una enjoyed most was discussing and wondering who exactly orchestrated what.  One thing is for certain, upon finishing the novel we both wanted to reread it immediately… to see if there was possibly something we missed.  Yes…yes, it IS that good.

If you haven’t read this series, please jump out from under that rock and start reading the first book, Moon Called.  This is the bar at which Gikany and Una have been known to rate other urban fantasy series.  It is truly that well written, the mythology that fascinating, and the characters that endearing.  As we eagerly await the next novel in this universe, we will pass the time rereading the series a few more times.

Attacked and abducted in her home territory, Mercy finds herself in the clutches of the most powerful vampire in the world, taken as a weapon to use against alpha werewolf Adam and the ruler of the Tri-Cities vampires. In coyote form, Mercy escapes only to find herself without money, without clothing, and alone in the heart of Europe…

Unable to contact Adam and the rest of the pack, Mercy has allies to find and enemies to fight, and she needs to figure out which is which. Ancient powers stir, and Mercy must be her agile best to avoid causing a war between vampires and werewolves, and between werewolves and werewolves. And in the heart of the ancient city of Prague, old ghosts rise…