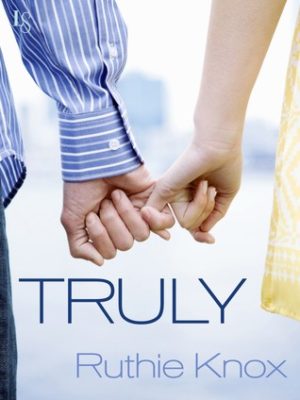 “May Fredericks hates New York.  Which is fair enough, since New York seems to hate her back.” May doesn’t just hate New York in Truly, the first book in Ruth Knox’ New York Trilogy.  May hates her body, her life, her indecision, and all the choices that have landed this Wisconsin girl in New York in the first place.  What she hates the most, however, is herself for all the things she imagined it would be when reality turned out to be so much less.  In some cases, just awful.  Every girl wants the love of her life to propose by telling her and the world in the most public way possible that she’s utterly forgettable, right? *eye roll*

Still, New York doesn’t seem to break her of the fantasy habit.  May was in crisis mode so she complained a bit much, but I have to say, I liked her anyway because I’m a chronic fantasizer.  Without conscious thought we mentally adjust to the way we think things are going to go every time we’re presented with a choice, or new variable, or opportunity.  We think we’re doing it to be prepared, but more often than not, we’re setting ourselves up for disappointment.  Reality slapped me in the face this week when even though my youngest son applied to four colleges and got in to three, he didn’t get into my alma mater. I was angry and disappointed about something I didn’t even realize mattered to me.  Without even being conscious of it, I had imagined visiting him on campus, setting up his dorm room, and hearing all about my favorite haunts as he lived around the campus that I had enjoyed as a student. As I stewed in my anger, I was truly surprised that my fantasy was so detailed.  Needless to say, I wholly identified with May who did this repeatedly.

Enter Matt Hausman, chronic grump.  Picture an angry Daniele Liotti or Luca Calvani in a hoodie, jeans, and an expression that says “go away.”  Being from Wisconsin also, Matt should be a kindred spirit.  He is not.  Matt couldn’t wait to get out of the Midwest and has built a life in New York.  In a first for me, our leading man is an urban bee keeper and gardener—a refreshing change from billionaires, lawyers, ex-military, FBI, and cowboys.  More than that, he’s a talent chef. Gotta love a man who wants to feed you all the time and doesn’t ignore you if you’re not a size 2.  He’s got his own reasons for wanting to help May when her life crashes down around her.  Together, the two bump, grind, fantasize, sight-see, shop, eat, and road trip their way to the conclusion that suits them both.

Even if the timeline it a little rushed, it is justified.  I would have liked more about May’s ex-boyfriend Dan and how that situation was resolved.  We know they talk, but not much else.  It seems that after occupying several years of her life prior to the start of Truly, he either needed to say gone or we needed more of that conversation instead of hearing about it as an aside.

Watch out for Madly, the next book in the series, which focuses on May’s sister Allie who’s having significant fiancé problems of her own.  Madly drops in March 2017.

May Fredericks hates New York. Which is fair enough, since New York seems to hate her back. After relocating to Manhattan from the Midwest to be with her long-distance boyfriend, NFL quarterback Thor Einarsson, May receives the world’s worst marriage proposal, stabs the jerk with a shrimp fork, and storms off alone—only to get mugged. Now she’s got no phone, n o cash, and no friends. How’s a nice girl supposed to get back to safe, sensible Wisconsin?

Frankly, Ben Hausman couldn’t care less. Sure, it’s not every day he meets a genuine, down-to-earth woman like May—especially in a dive in the Village—but he’s recovering from an ugly divorce that cost him his restaurant. He wants to be left alone to start over and become a better man. Then again, playing the white knight to May’s sexy damsel in distress would be an excellent place to start—if only he can give her one very good reason to love New York.

One response to “Review: Truly by Ruthie Knox”