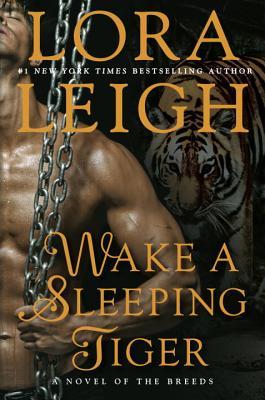 Cullen Maverick is a recessed gene Bengal Tiger Breed who has lived among and worked with the Navajo Nation as the Commander of the Navajo Covert Law Enforcement Agency. After losing his wife to cancer ten years ago, he’s kept himself closed off, even from the woman he suspects may mean more to his hidden Tiger.

Chelsea Martinez has been in love with Cullen for as long as she can remember, and has even worked for him for the past four years. But he’s put off her need to do more than push papers in the office, so she’s decided it’s finally time to leave the Law Enforcement Agency. Yet her resignation may push the recessed Tiger in Cullen to rip free and take over.

Prior to starting Wake a Sleeping Tiger, I went back and read my notes from the previous couple titles and realized that I had all but given up on the Breeds series, as it had become convoluted, full of new characters I didn’t care about, and frankly the editing left much to be desired in the storylines. But since I’d already picked up this title for review, I decided to go in with as much of an open mind as possible, and wow, am I glad I decided to read Wake a Sleeping Tiger! Overall, the writing and story are MUCH tighter than the previous books. There wasn’t really any wandering and meandering from thought to thought, but rather the story stayed focused on the romance between Cullen and Chelsea, as well as her work and the related story of the Cerves.

Cullen and Chelsea made a fantastic pair. Their romance was hot, and the story was filled with amazing sexual tension. And although there were definitely times when the couple kept their innermost true feelings to themselves, it didn’t dominate the story nor was it a reason they stayed apart from one another. Chelsea was very open from the beginning, telling Cullen: “Just go home and stop trying to protect me. It was never your protection that I wanted.” She shared her fears over the mating, yet didn’t fight him about it. I did get a little frustrated with Cullen because he didn’t share his fears and frustrations with Chelsea, but his inner-thougths conveyed to the reader his own fears and limitations. One thing that I’ve learned from this series is that the male Breed needs an independent female who is his equal, even though it drives him and his animal crazy. If she can’t stand up to him, she can’t handle his beast. This is very true with Cullen, as he is a Primal Breed.

In the end I really enjoyed reading Wake a Sleeping Tiger. It was a straight-forward story and a delightful, sexy Breed romance. Whether or not it actually forwarded the story, I’m not sure, but I like that it wasn’t full of hidden plots. I was glad to see some familiar faces and I truly hope the series is back on track. Wake a Sleeping Tiger has renewed my interest in the Breeds series.

On a moonless Navajo night, the recessed Bengal Breed known only as Judd became Cullen Maverick, grandson to one of the Chiefs of the Six Tribes of the Native Americans.

Bengal genetics, usually so fierce as to be labeled primal, was recessed so deep inside Judd that no hint of it can be found. A phenomena so rare it’s been notated only a few times. And there’s no way, it’s believed, to force those genetics free once they’ve disappeared past the genetic level.

Now, as commander of the Navajo Covert Law Enforcement Division in Window Rock, New Mexico, Cullen leads his six agents in protecting the treasures of the Navajo Tribes by ensuring they remain safely in Navajo possession.

Added to this mix is none other than the delicate Window Rock police detective determined to stick her pretty little nose in his business.

And once Cullen realized the animosity that keeps flaming between them is far more than he imagined, then the Primal Breed that’s lurked inside him comes out to play. And when that beast decides to make itself known, Cullen suddenly remembers all the reasons it was better off sleeping.