More Than a Slave 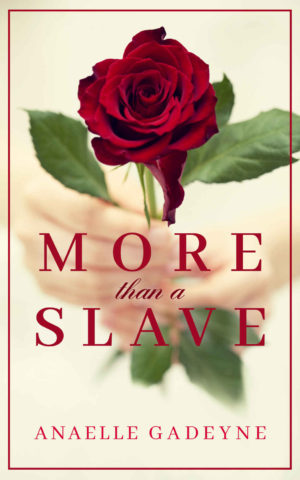 Aria looked as he slowly turned around and looked at her with what seemed to be shock on his face. Then she realized she had called him ‘Alexander.’
“I am so sorry. I meant Lord Alexander,” she quickly said. But he had a huge smile on his face now.
Alexander smiled because she thought she couldn’t call him Alexander. Of course, slaves actually couldn’t, but now that she had said it once he wanted her to say it all the time. He also smiled at what she had said. He smiled at her stubbornness.
“It’s all right. Wait, I will help you,” he assured, approaching the tree once more.
Aria shook her head. “No, I said I did not want you to be my charming knight.”
“So, why did you ask me to wait and told me you were stuck?” Alexander asked, amused.
“Because I am stuck And I need help,” she explained.
Alexander laughed at her stubbornness. This woman would be the death of him.
“Are you making fun of me?” She asked frowning and serious, a little offended that he was laughing at her.
“No, no, I am not,” he said, still laughing.
“Then stop laughing. It is not funny,” she stated before adding, “Just come up here and help me, please.”
Alexander stopped laughing but still had a smile on his face. It seemed so easy to smile around her. He usually wasn’t a man who wore a smile often.
“I thought you did not want me to be your charming knight,” he grinned, still amused.
“Ugh! Just help me, all right?” She said, sighing.
Alexander didn’t lose his smile as he climbed in the tree easily and reached her. He didn’t say anything and bent down to grab her ankle so he could free her. He had her tiny ankle in his hand and he looked up at her to see that she was looking at him. He quickly noticed the blush that reached her cheeks and looked back at her ankle smirking as he noticed the goosebumps she had there.
Aria looked as Alexander took her ankle in his strong and manly hand. It made her shiver. She had goosebumps all over her arms and her legs and her heart skipped a beat. She felt heat reaching her cheeks as he looked up at her.
She couldn’t feel like that about him.
She had just seen him having sex with another woman a few hours ago. But she couldn’t help how she felt about him. It was as if he was under her skin and she couldn’t shake him.
Alexander easily freed her foot and looked up at her. She was still looking at him. He looked at the ground to see how high in the tree they were and it wasn’t too high. It wasn’t that he couldn’t have jumped if they were higher but he suspected Aria wouldn’t have been able to.
“Come on, love. We are going to jump,” he told her, still looking down.
Aria gasped shocked. “Are you crazy? I am not jumping,” she stated, looking at the ground.
Alexander smirked as an idea crossed his mind. “Of course, you are not jumping. You are much too clumsy. You would break your leg or something.”
“I am not that clumsy,” she said with conviction, looking at him. Alexander tilted his head to the side and arched his eyebrow. “All right, maybe I am clumsy.” She sighed.
Alexander smiled and said, turning around, “Come get on my back. I will jump.”
Aria looked at him and then at the ground. Then she looked back at him and back at the ground. She concluded that she was way too young to die.
“Yes, sure. I am not going to get on your back,” she said, looking once more at the ground and back up at him.
Alexander was amused by the way she kept looking at him then at the ground; she was always so cute and beautiful.
“If you don’t get on my back, I will take you in my arms and if I lose my balance, I won’t be able to catch myself.”
“Ugh! All right, I will get on your back but as soon as we are on the ground you put me down.”
Aria pulled her dress up, just a little over her knees. She looked at Alexander who was waiting for her with his back turned to her. Without even warning him, she jumped on his back.
She was surprised when he only slightly budged. As if she hadn’t even jumped with all her weight on his back. She wrapped her legs around his waist to be sure she wouldn’t fall and her arms around his neck She shivered when Alexander put his hands behind her knees, on her skin, to keep her in place. She hated that she liked the contact of his hands on her skin

All Alexander could think about was her long, beautiful legs wrapped around his waist and her arms around his neck. He could clearly think about another condition where she would wrap her legs around his waist. He had to stop the thoughts before his trousers became too tight. But he couldn’t stop himself from putting his hands behind her knees to keep her safe and in place and smiled when she didn’t complain.

Alexander Anderson has a reputation that would strike fear into the heart of the devil himself. And now, I am his property.

Aria Starbird:
I’ve never been more afraid as the day Lord Anderson purchased me. A man known for his brutality towards his slaves, he is as fiendish as he is handsome and as wicked as he is wealthy. Underneath the charm and civility is a man who will take what he wants, the world be damned. A heartless, soulless monster, my master. But when our eyes meet I can’t help but wonder if there isn’t more to him.

Lord Alexander Anderson:
Love is a weakness and compassion leads to disobedience. The slaves line up like cattle, I can’t help but feel my usual disgust. Then she shuffles into view and something inside me starts to stir. It’s not the usual disdain I have for their type, something different, something dangerous. I can’t help but stare at Aria Starbird and know that everything has changed.