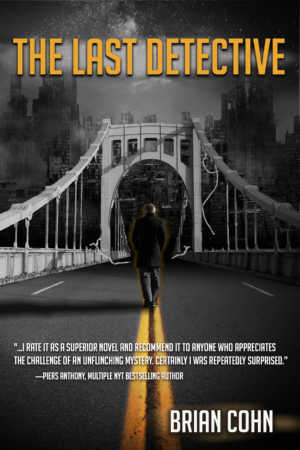 He’s shorter than I was expecting, his closely cropped brown hair receding into a V-shaped hairline. His thin arms and legs move quickly as he darts up the block on the opposite side of the street, his head swiveling nervously back and forth. As he reaches the end of the block and crosses the intersection, Katherine and I stand and begin to follow him.

We stay a block back from him as he winds his way through the city streets. The busy foot traffic of the late afternoon makes our job easier, and thankfully he isn’t a professional. If he was, he probably would have spotted the tail in the first couple of minutes, traffic or not.

Midtown and the business district quickly fall away behind us as we thread our way through middle class residential neighborhoods filled with brownstones and townhouses, then through lower-class neighborhoods where rundown apartment buildings predominate, before finally entering the Bottoms.

Sometimes referred to as Rock Bottoms, the area more commonly known as the Bottoms sits north of Midtown. Back in the early 1950s, the city government, in all its wisdom, built a series of public housing projects here to help fight the growing homeless problem. They had good intentions, but then again so did Stalin, and look where that got him. The result was the isolation and concentration of those with no money, no jobs, no prospects, and no hope. Crime and unemployment ran rampant, and the area served more as a trap than as a gateway to a better life.

By the 80s, people realized the projects were a failure, and most of the buildings were demolished. But the damage was already done. The apartment buildings that were built as replacements quickly filled with the recently displaced tenants of the projects. New buildings, same problems.

These less attractive neighborhoods are sparsely populated these days, in spite of the flood of refugees, and the streets become emptier and emptier as we descend into the city’s economic underbelly. Boarded-up windows covered in graffiti look out upon streets lined with trash. A couple of kids lie passed out on the sidewalk, their backs propped against the dingy brick wall of a four-story sh**house. No doubt they’re high on whatever new drug they’ve invented since the heroin and cocaine ran out. It never ceases to amaze me that even after the collapse of civilization, as society struggles to subsist and as food comes in shorter and shorter supply, humanity continues to find new and innovative ways to get drunk, high, and outright wasted. It’s simple economics I suppose, supply and demand. And demand is high these days.

After tailing Pembroke for a little more than half an hour, he finally turns down a side street and walks up to the front door of an especially dilapidated tenement. After he enters the building, Katherine and I jog the distance to the front door and peer through the security glass at a stairwell door swinging shut.

The front door creaks as Katherine begins to pull it open. She stops, then starts again, more slowly this time, until the door is open just wide enough for our bodies to slide through. Our feet tread softly over the cracked tile of the entryway, up three stone steps, and stop at the stairwell door. There’s a small vertical window, and through the corner I see Pembroke disappearing through the door on the second floor landing. I ease the stairwell door open, Katherine close behind me, hand gripping my shoulder. We slide through and take the steps slowly, cautiously, and reach the second floor landing without a sound. There’s no window on this door, so I pull it open a crack and wait patiently as my pupils adjust to the darkness of the hallway beyond.

We wait, Katherine’s breath hot on my ear.

Silence, then a muffled gasp from somewhere up ahead.

A moment later, one of the apartment doors crashes open and Pembroke lurches out. He pulls the door closed behind him with a trembling hand, failing to latch it, and stands in the darkness, breathing heavily. His face is somehow more ghostly pale than it had been before, and his eyes stare widely at the blank wall in front of him. The trembling in his hands continues unabated.

Even at this distance I recognize the look; I’ve seen it often enough.

He suddenly heaves forward, bent at the waist, and vomits on the carpet, splattering his shoes in the process. When he stands erect, a thin string of drool trails down from his lower lip onto his chin.

He finally turns and walks away at a hurried clip, heading presumably for some back entrance to the tenement. I watch him go in full knowledge of what we’ll find in that apartment, of what Pembroke found, and I’m no happier about it than he is.

When he’s safely out of sight, I open the door and step into the hallway. A stale, musty odor hangs in the cold air. Nobody’s lived in this building in months. It’s entirely possible it’s been shut off from the world for all of the last two years.

Until now, that is.

A shaft of light enters the hallway through the crack in the apartment door. It swings easily as I push against it, revealing a living room with a kitchenette on the far side. The bedroom door is wide open, an unmade bed against the far wall. At the foot of the bed is a piece of iron rebar, and next to the rebar is the dead body.

It’s been two years since the invasion.

Two years since the slicks came to our planet and herded humanity together like cattle, placing us under constant watch in the few cities that remain. The lucky ones are left to their own devices. The unlucky few are rounded up and carted off to labor camps to face an unknown fate.

Former homicide detective Adrian Grace was cut off from his family, but has somehow managed to survive.  When one of the slicks is murdered, they ask him to find the killer.  He reluctantly agrees, and in the course of his investigation witnesses the best, and the worst, that humanity has to offer: a plot to escape the labor camps; a pending war between an in-your-face councilwoman and the corrupt city mayor; and a priest who claims to have befriended the dead alien.  But worst of all, he stumbles onto a conspiracy that puts the fate of the entire city in jeopardy. In the end, Detective Grace discovers that the killer might just be the last person he would have suspected.

A story about betrayal, redemption, faith, fear, and hope, The Last Detective is a thrilling look at what happens to humanity when our world crumbles around us.