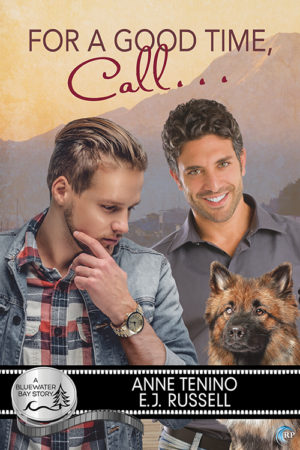 Having grown up under the weight of his famous great-great-grandfather’s legacy, Seth Larson has learned to content himself with waiting tables and helping his beloved Grandma out at the family’s estate. In a small town like Bluewater Bay, with its communal history making everyone around him far too familiar, hooking up whenever he was in the mood for sex had always worked for him just fine. Finding someone who really mattered was never a consideration, at least until he’s knocked off balance by a stranger who makes him want more than a random encounter could ever hope to deliver.

With two failed relationships in a row and a nearly-hostile connection with his famous mother still casting a shadow over much of his life, Nate Albano doesn’t have a lot of hope of being truly loved—not when his sexuality seems to inevitably drive everyone he’s ever fallen for away. Being grace is especially difficult when the heart that he can’t help but put first has already been bruised one time too many. Giving up on the idea is surely his best option. But, who would have guessed that his own expectations would be turned upside down by Bluewater Bay’s most infamous party guy?

We first met several of the characters in For a Good Time, Call… in Wedding Favors, the seventh in the Bluewater Bay series. Seth played an important role in that novel, and turned out to be my favorite of the two main characters here. Seth’s main cause of stress is his relationship with most of his family, rather than a lack of romance in his life. In fact, something that endeared Seth to me from the beginning is that he experiences a good bit of slut-shaming, both active and passive, in this story, which he handles extremely well by shrugging it off, for the most part. It simply is what it is. Additionally, I thought his determination to understand and respect Nate’s specific, non-generic, sexuality was notable.

Nate is grace/gray asexual, and I was happy to see the representation. The story deals with Nate’s sexuality in a matter-of-fact way, using his growing connection to Seth to answer a lot of potential questions about what it means, in this context, to be grace. In fact, it is Nate’s other relationship issues that cause a problem between he and Seth (as well as with his previous boyfriend) and threaten to ruin the best thing that’s ever happened to him, romantically. Fortunately, both men prove they can learn—and listen—before it’s too late.

As an aside, there were two other things, in particular, that I loved about For a Good Time, Call…: the dog, whose name is Tarkus, and a nod to the film Big Eden.

Once again, the Bluewater Bay series has given a complex situation some much-needed attention, and these authors ably illustrated that relying on labels simply isn’t sufficient if we’re to approach any real understanding. Both Seth and Nate learn the importance of honesty and communication along their journey, as well as the necessity of patience and trust. Also of consequence is the acknowledgement of the inevitability of making mistakes, and the damage that is sure to be inflicted by angry words spoken too soon. Despite its significance, Nate’s sexuality doesn’t dominate the narrative, keeping the tone from straying into any kind of preachiness and allowing the story to draw the reader in for its own sake. Overall, I think For a Good Time, Call… is a worthy addition to this series, and I very much hope it will continue for a long while to come.

Thirty-seven-year-old Nate Albano’s second relationship ever ended three years ago, and since he’s grace—gray asexual—he doesn’t anticipate beating the odds to find a third. Still, he’s got his dog, his hobbies, and his job as a special effects technician on Wolf’s Landing, so he can’t complain—much.

Seth Larson, umpteenth generation Bluewater Bay, is the quintessential good-time guy, content with tending bar and being his grandmother’s handyman. The night they meet, Seth’s looking for some recreational sex to escape family drama. But for Nate, romantic attraction comes before sexual attraction, so while Seth thinks they’re hooking up, Nate just wants to talk . . . genealogy?

So they declare a “just friends” truce. Then Seth asks for Nate’s help investigating a sinister Larson family secret, and their feelings start edging way beyond platonic. But Nate may want more than Seth can give him, and Seth may not be able to leave his good-time image behind. Unless they can find a way to merge carefree with commitment, they could miss out on true love—the best time of all.

Welcome to the For a Good Time, Call Blog Tour! We’re delighted to have you stop by, so please, make yourself comfortable. Can we offer you a virtual beverage?

As part of this blog tour, Anne and E.J. are giving away a $50 Riptide Publishing Gift Certificate to one lucky winner! *confetti* To enter the giveaway, please comment on any official tour post with your name and contact info before midnight (EDT), April 15th. Good luck, and enjoy the tour!

Catalyzed by her discovery of LGBTQ romance, Anne Tenino left the lucrative fields of art history, non-profit fundraising, and domestic engineering to follow her dream of become a starving romance author. For good or ill, her snarky, silly, quasi-British sense of humor came along for the ride.

Anne applies her particular blend of romance, comedy and gay protagonists to contemporary, scifi and paranormal tales. Her works have won awards, she’s been featured in RT Book Reviews, and has achieved bestseller status on Amazon’s gay romance list.

Born and raised in Oregon, Anne lives in Portland with her husband and two kids, who have all taken a sacred oath to never read her books. She can usually be found at her computer, procrastinating.

E.J. Russell holds a BA and an MFA in theater, so naturally she’s spent the last three decades as a financial manager, database designer, and business-intelligence consultant. After her twin sons left for college and she no longer spent half her waking hours ferrying them to dance class, she returned to her childhood love of writing fiction. Now she wonders why she ever thought an empty nest meant leisure.

E.J. lives in rural Oregon with her curmudgeonly husband, the only man on the planet who cares less about sports than she does. She enjoys visits from her wonderful adult children, and indulges in good books, red wine, and the occasional hyperbole.

To celebrate the release of For a Good Time, Call…, one lucky winner will receive a $50 Riptide credit! Leave a comment with your contact info to enter the contest. Entries close at midnight, Eastern time, on April 15, 2017. Contest is NOT restricted to U.S. entries. Thanks for following the tour, and don’t forget to leave your contact info!

This giveaway is sponsored by the authors. Open to participants who are legally allowed to participate in such a contest as allowed by their local laws. All federal, state, local, and municipal laws and regulations apply. Void where prohibited. No purchase necessary. By participating in the contest, participants agree to be bound by the decisions of the contest sponsor. Prize will be delivered by the contest sponsor. This blog, its reviewers, and the owner are not responsible for items lost in the mail. By entering this giveaway, participants agree to abide by these terms.

One response to “B Review + Blog Tour: For a Good Time, Call by Anne Tenino and EJ Russell”