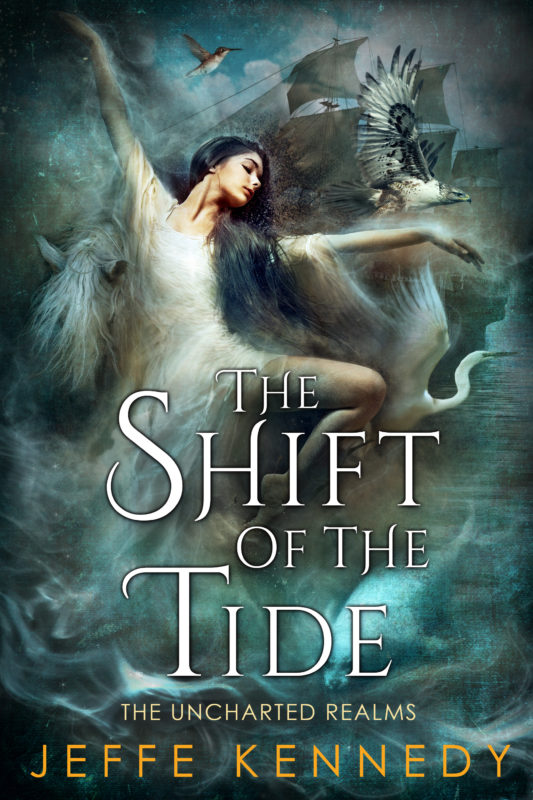 The Shift of the Tide – Uncharted Realms #3

Free from the hand of a tyrant, the Twelve Kingdoms have thrown all that touch them into chaos. New allies appear–and enemies encroach–from all sides. To survive, they must adapt to this new reality without a moment of doubt…

Growing up in a country where magic was common as dust, Zynda never had to worry about her enchantments upsetting the balance of nature. But the land beyond the borders of the thirteenth kingdom calls to her. It may be foreign and ugly, but the strangeness is laced with an excitement she has never known. Outside her homeland, Zynda’s shapeshifting and sorcery are a potent advantage to nations grasping for dominance–and the thrill of power lures her even as she recognizes the threat she poses to these magic-buffeted realms.

A ruthless enemy stalks them, promising destruction if she does not fight with all her strength–but if she upsets the equilibrium of the land, all will pay, the common people most of all. And a man of this outside world fascinates her, a mossback with no scrap of magic in him. He knows nothing of the fears and temptations pulling at her. But in his steady embrace she learns she must choose well–for the consequences may reach farther than she ever imagined…

Pre-order links will be added to the website:
http://www.jeffekennedy.com/category/books/?series=the-uncharted-realms

And keep an eye out for The Shift of the Tide on Jeffe’s Amazon Page as well:
https://www.amazon.com/Jeffe-Kennedy/e/B001KIASYE