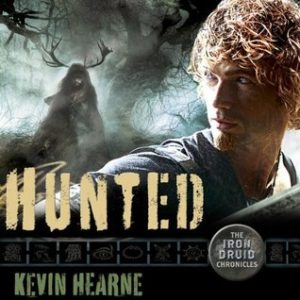 After completely enjoying the previous title, Trapped, I couldn’t wait to get into Hunted; however I was a bit apprehensive over what would happen to my favorite trio of characters as life seemed to be going “too good” for them. Of course, life didn’t stay safe, and the opening of Hunted was rather surprising as the Morgain helps fight off the Roman-Greco goddesses of the hunt to save Atticus. She confides in Atticus some rather telling information that made me relook at her character. Now Artemis and Diana are hunting Atticus, Granuaile, and Oberon across Europe to seek retribution for perceived losses, and all of Europe has been struck with Pandemonium, preventing their escape to Tír na nÓg.

I love that Hunted is a blend of pure adventure as well as a mystery to be solved. Someone/s is out to end Atticus and has recruited a number of players in the effort. Not only are the Olympic pantheons after him, but there are vampires, dark elves, and gods tracking his every move. Oh, and Loki is on the loose, again. Finding out that Jupiter, Zeus, and Odin are following along and watching the chase for entertainment is the perfect nod to the classic tales. The battles are epic and even a bit frightening. Meanwhile, Atticus believes a powerful fae is orchestrating the efforts against him, and his weariness and fear had me on the edge of my proverbial seat. With so much going on, I thought I’d be lost, but rather, I was completely engaged as I followed along the frantic chases.

The book also treats us to chapters from Granuaile’s POV. While the first time it occurred it almost felt out of place, later I realized it was setting me up for the events to come. I enjoyed seeing life through her younger and unfettered eyes. Although, being Atticus’s apprentice and now companion has forced Granuaile to quickly mature and deal with the ugly. Granuaile’s perspective and powers, along with her powerful feelings, adds so much to the series and each story. She balances Atticus perfectly, and I simply love how much Atticus, Granuaile, and Oberon have become a genuine team.

The narration of the story is simply amazing. Mr. Daniels continues to provide constantly strong performances, with every character having a unique and fitting presence. He finds a way to add strong emotion into the story when warranted, and he often gets a chuckle or two out of Atticus when dealing with his best bud, Oberon. Additionally, this time around he narrates whole chapters from Granuaile’s POV, distinguishing these chapters from Atticus’s with his softer, feminine voice exclusively used for Granuaile. But best of all is Oberon, who’s voice is so fitting and genuine that I now assume all dogs speak this way.

In the end, I absolutely enjoyed Hunted. The only reason I gave it an A- instead of A is that I felt the story just stopped with too much left unfinished… like it was a pause in the story, rather than the finish of it. Yes, Atticus and Granuaile are safe, and the Olympians settled, but so much is still out there. I didn’t expect the story to end like it did. But WOW — I am hooked!