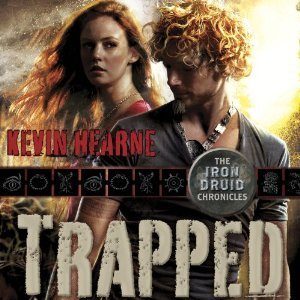 Twelve years have past since the last book, and Granuaile has finished her Druidic apprenticeship. Looking for a safe place to bind her to Gaia, the earth, Atticus discovers that Loki is free and the Olympus pantheons are plotting against him. Now the pair, along with best hound friend, Oberon, are trapped between a rock and a hard place unsure who to trust, as they try to find a safe place to tie Granuaile to the earth.

Oh I really, really enjoyed Trapped. I love the deepening connections Atticus and Granuaile. The book isn’t about romance, but their love is true and a perfect addition to the overall mythology and storylines. Stories are best when the reader/listener connects with the characters, developing a relationship with them. In this case, I’ve grown to care about Atticus, Granuaile, and Oberon, making their journeys more exciting and emotional. And all three characters have matured so much since the first book. Especially Granuaile, who is now a full Druid. Yet she still has so much awe for the world around her. Having Atticus reconnect and rediscover the wonders of the earth and other planes through Granuaile, in effect allows me the same discoveries and awe-inspiring experiences.

I also appreciate and am extremely thankful of the direction the author has taken with the overall story arc. Atticus continues to pay for his crimes when he chose to help Leif seek revenge against Thor instead of walking away and staying neutral. It was one thing to kill Angus Og, who had been hunting him, but to assist in and cause the destruction he did to the Norse pantheon was simply outrageous. And now, over twelve years later, his actions are still causing him problems. Atticus’s introspection over his choices is the perfect blend of regretfulness and acceptance. He understands that he may never make amends and balance the scales, but he will do his best to try. However, it seems that in his effort for atonement, Atticus continues to cause more issues, and the problems he and Granuaile face just keep growing in a trickle-down effect.

Luke Daniels continues to surprise and amaze me with his consistently strong narration. Not only has he mastered the voice for Atticus, Granuaile, and Oberon (which I completely love!), but his wealth of accents for all creatures great and small is astounding! He seems to fit each character’s personality with a slight inflection here and there, or an outrageous accent when called for. He softens his voice for gentler characters, rasps it for deadly ones, booms loudly for thunder gods, and some how works in jovial mirth into others, making each voice utterly unique and memorable. Mr. Daniels is top of his game in Trapped.

Trapped is a self-contained, wonderfully written story, but the ending makes it clear that danger is around every corner for Atticus and the gang. The story served to whet my appetite for the future tales as I wonder how Atticus can right his wrongs and save the world without dying.

Story: A
Narration: A+