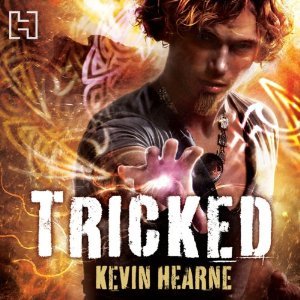 Tricked opens with Atticus’s spectacular death as foreseen by the Morrigan. Her prophesy was actually a deal that Atticus brokered with Coyote in the previous book, something readers/listeners were not privy to at that time. Coyote shifted to look like Atticus and then let the remaining, avenging Norse pantheon kill him, with the help of a few thunder gods. Now Atticus, Granuaile, and Oberon must move on, but first Atticus must fulfill his promise to help Coyote move some earth. Well, knowing that Coyote is a trickster god means nothing is as it would appear.

After the self-serving adventures into Asgard that dominated the previous title, I was thankful to see that there were indeed consequences to Atticus’s actions. Hel has been unleashed on Earth, and she looks to start Ragnarök for her father, Loki. While this wasn’t the primary plot of the book, I was glad Atticus now realizes the mistakes he made when he indulged Leif’s vengeance. And speaking of Leif… he is back, and he has changed. Or maybe he hasn’t changed, but now that he’s used Atticus for the purpose he intended, we are privy to his true vampiric nature.

I enjoyed Tricked for its Native American-based mythology. While I have no clue how much of it is based in actual beliefs, I found the story engrossing and the mythology interesting. My favorite character was the Navajo spiritual leader who brought a new level of spiritual magic to Atticus, and conversely, he learned much about the earth’s magic from Atticus. Their temporary bond was genuine and fruitful.

It looks to me like the series is heading for change, with the farewells in the previous book, Hammered, and the start of new identities in Tricked. Atticus wants to focus on training apprentice Granuaile, who he is also completely taken with. I love his awkwardness around her. I also enjoyed how he opened up about his own long life to her. Granuaile, in turn, shares some secrets with Atticus that she had been internalizing. Their bond is growing stronger. I also really like the development of Oberon’s character. He’s becoming an intelligent, humorous sidekick. His nature has matured and grown into more than “man’s best friend.”

Luke Daniels remains a strong narrator, once again adding a number of different voices and accents to his already huge repertoire. His voice for Oberon has matured, while still remaining dog-like, which suits the character well. I was also glad that the Navajo voices were nothing like Coyote, who did have a big roll in this book. Although Coyote’s voice still grated on me, it wasn’t as bad this time because Atticus no longer imitated Coyote’s inflections; keeping his true voice was a hundred times more enjoyable.

Overall, I enjoyed listening to Tricked. I liked seeing Atticus deal with the outcomes of his actions from the previous book. It’s refreshing that the 2,000 year old Druid is humble enough to still learn new things, yet remains arrogant enough to survive. I have to imagine after living that long, you can get set in your ways and let grudges grow, but he is good at letting go. I like the deepening relationship with Granuaile, and Oberon was plain excellent.