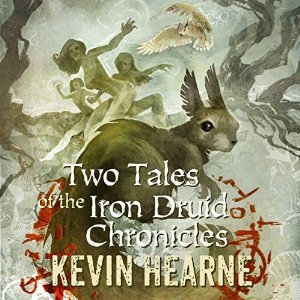 The first tale, Kaibab Unbound, takes place shorty before the start of the series. Atticus and his dog companion, Oberon, go north to the Arizona wilderness for some hunting time. However, their trip is cut short when the Kaibab elemental calls to Atticus for assistance, and Atticus must right the wrongs of a trio of witches.

The short story is a glimpse into Atticus’s life and duties as the last Druid. It’s a self-contained short and good introduction to the series. It was enjoyable for this existing fan of Atticus and Oberon.

Test of Mettle is a bit different because it is shared in the first person POV narration of Atticus’s apprentice, Granuaile. The story takes place concurrently with book 3, Hammered, when Atticus is in Asgard. Granuaile is keeping her promise to Sonora, the desert earth elemental, by ridding the river of an evasive species, when she is attacked by animals under the direction of the goddess of the hunt, Flidais.

Test of Mettle was my favorite of these two tales because it gives a perspective we don’t normally experience. I liked seeing how Granuaile interacted with Oberon since she can’t hear him, therefore neither can I. I also enjoyed seeing her survive her trials and get a new perspective of her enjoyment and desire to become a Druid. HOWEVER… there is a dark side to Granuaile as she thinks about a time in the future when she will be able to destroy her stepfather. Eep!

While the stories are both narrated by series narrator Luke Daniels, my first notice was that the narration was slightly different. The biggest difference was that Oberon came off a bit rough around the edges – more wild and goofy than I’m used to. I don’t know if it was recorded early on or if the narrator purposely changed slightly.

Since we haven’t had a story told from Granuaile’s POV, I didn’t have a lot to compare her voice to. Mr. Daniels kept his narrator voice softer and lighter than what he uses for Atticus and therefore, appropriate for this female lead, and there was no confusion who was sharing the tale.

Overall, Two Tales of the Iron Druid Chronicles is a very enjoyable look into the series. The book is like a slice-of-life duology. It’s a good place for newbies to get a feel for the series without too many spoilers, so one could then go back and start the series with the first book.

Rating: B
Narration: B