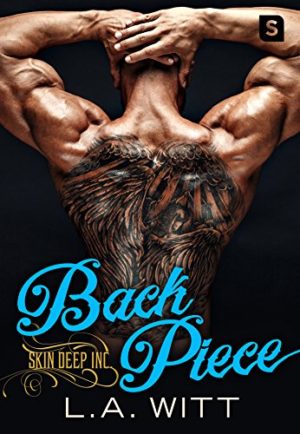 Back Piece
Author: L.A. Witt
Reviewer: B.
Rating: B+

To say that Colin Spencer—gorgeous, fit, and with a body full of tats—has lived an interesting life so far is an understatement. Most would never guess the truths that exist behind the sturdy exterior he presents to the rest of the world. Colin has demons he can’t escape, and enough heartbreak to cure him of ever wanting to lose his heart to someone again. But, everyone has secrets beneath their skin, and the young sailor who’s given Colin a glimpse of his own fears and dreams might be more temptation than he can resist.

Daniel Moore is twenty-six years old, semi-closeted, and really wants a tattoo. Good thing he’s just met the perfect guy for the job: the striking civilian tattoo artist who left him tongue-tied and wanting after their first chance meeting. Soon, he can’t think of anything else. But, Daniel is terrified of his own truths, and hiding from the very people who should know him best. What would a man like Colin possibly see in someone like him?

Although there is plenty to think about in Back Piece, I believe some of its strongest moments are when Colin and Daniel’s beliefs and opinions—both about themselves and others—are challenged. The author makes quite a few significant points, not the least of which is that very little is as easy or as clear cut as it seems. Colin has a wonderfully supportive, accepting family, but still has serious issues that he’ll have to work through for the rest of his life. Daniel’s, on the other hand, is the exact opposite, yet Colin recognizes that, in some ways, they’re good as a unit. This is just one example, but I appreciated that there was so much to consider here.

Another plus is the honesty that exists between Colin and Daniel almost from the beginning. There are a couple of wobbles early on in their relationship, but neither is willing to let the secrets that might be exposed in a given situation linger long enough to become huge problems. This sense of integrity opens the way to mutual acceptance that felt as right as it was sweet, and saved the entire story from the often-overused burden of lies.

As much as I liked the attention the author gave to the rest of the narrative, I couldn’t help but be somewhat conflicted in one particular area at the same time. While there are certainly plenty of steamy interactions between Daniel and Colin, I think parts of the story could have benefitted from a little less sex. Though a fair number of the most intimate scenes in Back Piece were crucial to Daniel’s sexual awakening, a few appeared to be unnecessary, and I felt that the emotional connection that was growing between them might have felt richer through the lens of their newly shared memories instead.

In the end, I liked Daniel and Colin quite a lot, though both had their rough edges, as well. Likewise, while there were one or two moments that pulled me out of the narrative a little bit, there were plenty of good things to say about the story as a whole. The abrupt ending kept Back Piece from feeling finished, but that likely works to its advantage as a HFN. I definitely want to find out more about the world of the Skin Deep characters, regardless. Ultimately, I think this series has a great deal of potential, and I’d love to see what happens with Colin and Daniel farther down the line.

Colin Spencer is a tattoo artist with a past he’d prefer to keep a secret. Actually, he has a few secrets that he’d rather people didn’t know about, which is why Colin doesn’t do commitment. But when a shy naval officer approaches him at the gym, Colin finds this guy pushing all his buttons.

Growing up in a conservative family, then escaping with the Navy, Daniel Moore is an unsure virgin who feels like he can’t share his true self with anyone. Seeing Colin—and his tattoos—at the gym are the sign Daniel needs to finally get those tattoos he’s always wanted, and maybe try his hand at flirting.

As Colin and Daniel spend more time together, their awkward hesitations turn into a deep passion neither expected. But with both men harboring secrets, will their relationship be able to survive their insecurities and become something beautiful?

Back Piece is a sexy, emotional journey of two people learning to love and finding acceptance for who they really are.

One response to “Review: Back Piece by L.A. Witt”