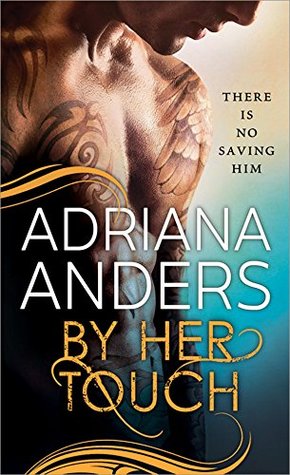 By Her Touch
Author: Adriana Anders
Reviewer: VampBard
Rating: A

I’m an ink junkie. Anyone that knows me will tell you that. From the time I was old enough to appreciate tattoos as art, I’d wanted one of my own. I wasn’t able to get my first until around the time I’d turned forty, and now I have…a lot. ☺ They tell a story of who I have been, who I am, and who I will be.

So, when I had the opportunity to read the first title of the Blank Canvas series by Adriana Anders—Under Her Skin—I jumped at the chance. I wasn’t disappointed. I was eager to read the next installment in the series…and O…M…G. I don’t think I’ve ever read a tortured hero like Clay.

While George was a wonderfully rounded-out character and I was able to connect with her, have my heart break for her and her losses—her situation. The road she’d traveled to get to this moment in time that brought Clay into her life hadn’t been all sunshine, lollipops, and rainbows. She’d known pain. But, when we look at George as a reflection of ourselves, she had been merely a husk of a person. Seeing her character grow gave me that warm, fuzzy feeling.

So. Clay. When I read a book about a guy that was trying to do the right thing and basically got screwed over, I always get a little indignant on his behalf. Why can’t the good guy ever have an easy time of it?!? Hahah. That’d be too easy. Without pain, the pleasure isn’t quite so sweet. And Clay had had plenty of pain. Emotional pain, physical pain—you name it, he’d had it. One of my thoughts was, “How can a man that’s gone through so much in his life be ready for a truly committed relationship?” Truth is, it’s hard to tell. Oftentimes in a situation like that, one can’t even recognize themselves. It’s like digging out of a pit—having to gently slope the sides to climb out and have a chance to be whole. Doing all the hard work—the digging and climbing—is part of the process, so even when someone tosses down a rope ladder, it really isn’t helping matters, much.

What really drew me to Clay, though, was the fact that he carried the story of his past, present, and future. Whether he realized it or not, he bore the marks that would define who he was as a person. They don’t have to be pretty, and they don’t have to remain, but what they DO do is remind us of who we are, and where we came from. They remind us of places we never want to go again. And, in a twisted way, they show us what we want for our future. That message is what drew me to Clay.

By Her Touch was an expertly crafted tale of two lost souls who found one another at the perfect time in their lives. I was immediately drawn in by the two fractured main characters and the growth in their characters that allowed them to become whole—and to be ready for a happily ever after.

Undercover cop Clay Navarro left the Sultans biker gang a changed man. Its ringleaders may be awaiting trial, but he wears the memory of every brutal act he was forced to commit tattooed across his skin. He doesn’t have space in his messed-up life for anything gentle–not now, maybe not ever.

Dr. Georgette Hadley is drawn to the damaged stranger’s pain, intimidated but intrigued by the warmth that lies beneath Clay’s frightening exterior. But when the Sultans return looking for revenge, she finds herself drawn into the dirty underbelly of a life forged in violence…that not even her touch may be able to heal.

Reviews in the Series:
Under Her Skin by Adriana Anders (Blank Canvas #1)