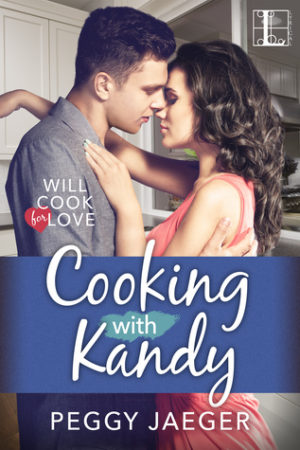 Cooking with Kandy is the EBC’s number one food show, making Kandy Laine a highly successful woman, and apparently a target. Kandy is self-driven with high standards and an incredible work ethic. While she is extremely busy, family always comes first; she is giving, caring, and would do anything for those in her inner circle. So when threats on Kandy’s life grow more serious, she’s honestly perplexed that it could be coming from someone close to her.

Josh Keane was hired to protect Kandy and get to the bottom of the threats. While he has always put his job first, his instant attraction to and growing friendship with Kandy messes with his head and heart. Will getting to the bottom of the danger signal the end of his time with Kandy… or will it start the beginning of something more?

Cooking with Kandy is an enjoyable combination of sweet romance and light mystery/suspense. As the first title in Ms. Jaeger’s new Will Cook for Love series, readers are introduced to Kandy and her entire extended family, ninety percent of which seem to work for her in some capacity. The author has created a warm, genuine environment, which should serve well for the series setting.

Kandy and Josh are two peas in a pod (food reference intended!); both are driven individuals who have their own fair share of baggage. While each has found success and happiness with their career paths, it isn’t until they are put together that they truly see some holes and loneliness in their lives. Although they are forced by circumstance to be together, they develop a genuine bond, and the nature of the events surrounding their pairing lends itself to a rapid opening up and sharing of innermost thoughts and desires. Josh and Kandy are sweet together. They are like the couple that finishes each other’s sentences. And while it took a little while for the steam to build, once the couple allows themselves to indulge in desire, the heat factor raises quickly.

Kandy’s world is full of characters, and at times it was difficult to remember who was who. This is important because not only is the book a romance, there is a pretty serious mystery which gives way to a bit of suspense. Ms. Jaegar establishes a solid problem, complete with clues and red herrings. I enjoyed piecing together the puzzle and trying to discern which clues were real and which I could toss out. I had one small complaint about the unveiling and the perpetrator, but I can’t share it without being a spoiler. Nevertheless, it didn’t ruin my enjoyment of the title, which overall was an exciting ride.

At its heart, Cooking with Kandy is a lovely sweetheart romance with an engrossing whodunit plot. Kandy and Josh are both intense yet joyful, making them a great match and tender pairing. Although each had a few hiccups in their behaviors that bothered me, overall I enjoyed how they took time to work out problems, no matter how personal or painful, together. I look forward to reading more stories set in the Will Cook for Love series.

Kandy Laine built her wildly popular food empire the old-fashioned way—starting with the basic ingredients of her grandmother’s recipes and flavoring it all with her particular brand of sweet spice. From her cookbooks to her hit TV show, Kandy is a kitchen queen—and suddenly someone is determined to poison her cup. With odd accidents and threatening messages piling up, strong-willed Kandy can’t protest when her team hires someone to keep her safe—but she can’t deny that the man for the job looks delicious. . .

Josh Keane is a private investigator, not a bodyguard. But with one eyeful of Kandy’s ebony curls and dimpled smile, he’s signing on to uncover who’s cooking up trouble for the gorgeous chef. As the attraction between them starts to simmer, it’s not easy to keep his mind on the job, but when the strange distractions turn to true danger, he’ll stop at nothing to keep Kandy safe—and show her that a future together is on the menu. . .