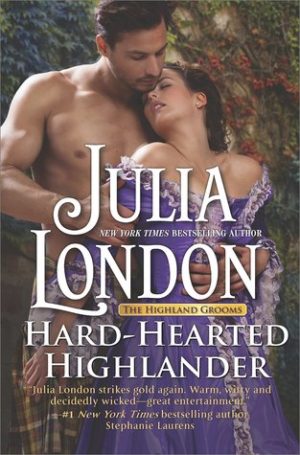 Rabbie Mackenzie longs for the days before the Scots and English were at war, a time before his beloved was murdered and worse. Nearly suicidal: he doesn’t want to live, but doesn’t have the courage to die. Set to fulfill a family obligation by marrying a very young English bride, he finds little joy except when in the company of Bernadette Holly.

Miss Bernadette Holly has her own secrets and cross to bare. She works for Lord Kent, serving his daughter, Avaline as her maid and confidant. Torn between saving Avaline from a horrible marriage to Laird Mackenzie and her own haunted past, Bernadette finds solace on her long walks and surprisingly, in conversation with Rabbie.

Hard-Hearted Highlander starts a couple years after the conclusion of the previous title in the Highland Grooms series. We discover that life as a Highlander has become rough and even dangerous, as the war with England is not going well. The Mackenzies are struggling and many of their neighbors have fled to safer lands. In order to protect their interests, they strike a marriage bargain with Lord Kent. However, his younger daughter (17, to Rabbie’s 35) is a selfish child and Lord Kent is a monster, and this causes a lot of difficult and awkward interactions.

Both Rabbie and Bernadette are jaded survivors. Their backstories are similar, both losing much. Yet when Rabbie turned inward and contemplated death, Bernadette dove into her work and pushed the past away. Both live each day with holes in their souls, and it isn’t until they see past the surface into one another that they finally begin to heal.

While Rabbie and Bernadette are perfect for one another, I struggled with the story and romance between the pair. The first quarter of the book was slow moving and confusing as it was full of political maneuvering. Additionally, it took at least that long before the pair even had a civil conversation. However, the largest hurdle that I struggled with was the simple fact that Rabbie is engaged to Bernadette’s charge and friend, regardless that it is an arranged marriage and neither party wants to go through with it. Bernadette experiences tremendous guilt over her feelings and actions, which really dampened any of the butterflies she feels from her attraction to Rabbie.

Once the wedding was finally called off, the book was nearly over. Yet Rabbie still had the work of winning over Bernadette, and honestly by then, it was hard for me to stay interested in the pair. I was bothered by Bernadette’s reactions. She was so strong throughout the entire book, and then when her chance for love was in front of her, she reacted counter to what I would have thought. And the way Rabbie won her over was a bit questionable to me.

In the end, while I simply adored the couple, I didn’t care much for the story behind their romance. First they involved themselves when Rabbie has committed to wed another. I understand things were different back then, but I couldn’t support their actions because Bernadette felt guilty the entire time. Then when they had the chance to be together, Bernadette fell apart. Hard-Hearted Highlander may work for others, but I struggled with the romance and story.

An ill-fated elopement cost English-born governess Bernadette Kent her reputation, her fickle lover and any chance of a future match. She has nothing left to fear—not even the bitter, dangerously handsome Scot due to marry her young charge. Naive wallflower Avaline is terrified to wed Rabbie Mackenzie, but if he sends her home, she will be ruined. Bernadette’s solution: convince Rabbie to get Avaline to cry off while ignoring her own traitorous attraction to him.

A forced engagement to an Englishwoman is a hard pill for any Scot to swallow. It’s even worse when the fiancee in question is a delicate, foolish young miss unlike her spirited, quick-witted governess. Sparring with Bernadette brings passion and light back to Rabbie’s life after the failed Jacobite uprising. His clan’s future depends upon his match to another, but how can any Highlander forsake a love that stirs his heart and soul?