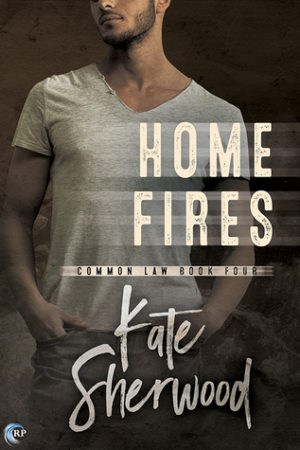 I’ve had the pleasure of following the Common Law series from the beginning, and I believe Home Fires to be the best yet. While I had a couple of random issues early in the series, this story brought everything together far better than I had anticipated it might. And though my fondness for Wade hasn’t lessened one bit, I’ve now fallen for Jericho, too, and feel that both men got an ending to the story that suits them very well.

While the more suspenseful elements have consistently been my favorite moments of the series, Home Fires has a few that I think excel over the others. In what is arguably one of the better confrontations in the Common Law stories, whatever uncertainty still existed in Jericho’s mind is thoroughly destroyed, and I enjoyed reading it tremendously. It’s certainly among the best showdowns I’ve read in a long while.

Despite the inherent battles Jericho and Wade fight within the shades of gray that surround them, the affection and wanting that simmers and flares between them is undeniable. Often teasing, but hardly ever explicit, their relationship is born of scars and memory and is as restless as the characters themselves. They’ve earned their resolution and I was glad to see them have it at last. Besides, there were plenty of other things to fight in Home Fires, so why bother?

Still more to like about Home Fires is that there’s plenty of humor, albeit as dry and sarcastic as ever, if not more so. The citizens of Mosely really are Jericho’s people, and the comfort he finds in accepting it is both evident and welcome. No longer the prodigal, he’s his best self now, especially with Wade at his side. Or watching his back. Or blowing up the evidence room at the police station. Whatever they’ve figured out between them works—not just for them, but the whole town, as well.

After four books, I’ve become attached to this series, and I’m very sorry for it to end. The author set a nice pace throughout, making the culmination of steps Wade and Jericho have taken seem justifiably rewarding—for the readers as well as the characters. Each story is both manageable and engaging, and I absolutely recommend reading all the books, rather than any of them as standalones. Home Fires made for a perfect ending, and I think starting the whole thing over again will be just as much fun.

Trouble comes to Mosely, Montana, from the outside world. When the residents of Mosely are left on their own, they can make things work. Sure, there’s always been a militia operating up in the hills, but they were small-scale—just survivalists doing their thing—until organizers came in from out of state. Now Jericho Crewe and the rest of the sheriff’s department are facing down a heavily armed band of fanatics, and the feds are busy elsewhere.

The odds are hopeless, but Jericho swore an oath to serve and protect the citizens of Mosely. He won’t walk away from that, even if Wade Granger’s begging him to run away somewhere and finally be together the way they always should have been.

But this time, it’s Jericho who refuses to leave Mosely, even if staying kills him.