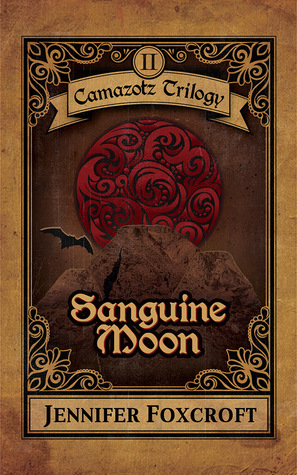 Sanguine Moon is the second installment in the young adult paranormal romance Camazotz Trilogy.  It picks up right where Sanguine Mountain left off.  I appreciated the fact that this was not a filler book, but had its own, valid plot.  While it is a complete story, this is definitely a “read in order” trilogy, also setting us up for book three in the last chapter. With two years between the release of the first and second installments, there is a character list in the back to help the reader keep multiple players in order. I found the first story was unique enough that I did remember most of it and have been looking forward to this read.

I’m enjoying continuing this alternate version of the vampire myth.  Camazotz are a species of shape-shifting vampire bats—more zoology, less Bela Lugosi.  They shun modern technology and outsiders in an effort to keep their secrets.  Main heartthrob Rockland “Rocks” is desperately in love with aeronaught (ordinary human) Connie Phillips. Unfortunately he’s also heir-apparent to leadership of his colony.

Connie has her own troubles as the identity of her biological parents prove to be more than problematic. In fact, they become very adult problems which is why I was frustrated by Connie’s lack of faith in the adults in her life—parents who are perfect in a way only fictional characters can be.  Keeping them from the action of the story felt a little contrived, even if necessary.  Academy Award winning director Keith Merrill once said, “If you’re a screenwriter and understand the essence of drama, and you want to plunge your characters into conflict and keep them there, then you probably need to ‘lose the mom.’ Mothers go missing in movies because leaving them in the lives of characters in crisis makes sustaining conflict difficult. Mothers listen and understand, solve problems, and resolve conflicts. They are selfless and love without conditions. You want to stir up a heap of trouble and make it believable? Better keep Mom out of it.”  Foxcroft’s justifications for keeping good parents “out of it” wore very thin before being resolved.  To her credit, however, when we finally got there, it was almost a physical relief.  I hope it is appropriate to give them a larger support role in book three.

Rocks has his own problems with his colony.  Their fear of the outside world, especially new technology, continues to create problems.  Teen readers will be as frustrated as Rocks that his leaders can’t see the benefits, even putting his relationship with Connie at risk to do so.

Don’t be put off by the fact that this self-published series.  Foxcroft has taken great care to produce a professionally edited, quality product.  I read the paperback version and even the pages are thick. She clearly takes pride in the product she’s put out and I’m looking forward to book number three.

When Connie Phillips began keeping secrets from her adoptive parents, she was unaware of the darkness she would bring into her world. Discovering she is the daughter of a crime lord had consequences even she could never have predicted. Consequences that put her first real love—Rocks—and her adorable baby sister in mortal danger. With many lives balanced in her hands, Connie must find a way to save Rocks’ life, while keeping his identity a secret. Navigating the antiquated ways of the Camazotz culture, while trying not to offend the colony’s leaders with her modern technology, is harder than Connie ever imagined. When Rocks defies certain death using present-day medicine, the Camazotz are torn. If they consider modernizing, they risk discovery and subsequent extermination by the aeronaughts. But hiding away in their mountain roost has left them vulnerable to an unidentified enemy slowly picking them off one bat at a time.