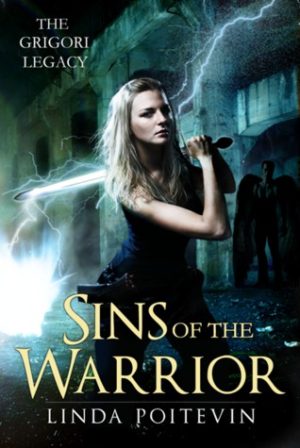 Sins of the Warrior is the final book in the gripping Grigory Legacy series.  While I am chagrined to say I liked it – the ending was a bittersweet yet satisfying conclusion to this series of Armageddon.

First, I wish I had the time to at least reread the previous novel. It has been a few years since I’ve read Sins of the Lost. It took me a bit of time to jump back in. The beginning was slow for me as I struggled to remember so much of what had happened over the course of the series. If you haven’t read the series or are interested, trust me, start from the beginning. But once my brain cells kicked in and I recalled the past, I soon found myself gripped by this novel.

****If you haven’t read the series, this review will contain spoilers.****

As the novel begins, we find Alex hunting for her niece.  Her steel core of honor and duty won’t let her give up on her niece or on the world.  Alex has sacrificed and suffered since the beginning of this series. This novel is no different.  She continues to exemplify true courage, loyalty and determination.  Alex balances on the razor’s edge of sanity as her world and her future falls apart. However, it is a sign of her platinum will that she holds herself together, continuing on the path of doing what is right; even though the effort and choices are excruciating.  Though in the end there is a bittersweet consolation, it was still sad.

I enjoyed how Michael (or Mika’el) was more fully developed in this book.  We see more than just the gruff warrior exterior – there is so much more to him.  Through this novel, it makes sense the by-play between him and Alex.  They are both warriors cut from the same cloth.  They have the same loyalty, same courage and determination and sadly, the same ability to sacrifice, to make the hard choices.  Once they start letting down their guards, they discovered how much alike they are, that they are both working for the same goals.

What keeps me from rating this higher is that it is sad.  The end of humanity is not something you can say you loved.  This is Armageddon – the absolute war. The losses in this war will be catastrophic; you cannot protect all you love. And there is much loss in this book.  I hesitate to say trigger warnings – but though the violence isn’t gratuitous – it is heart wrenching and difficult.  That being said, it is fitting and the plot flows logically.  I feel the story could not have ended any other way but my heart screamed for something happier for Alex.  But it is satisfying that we are left with hope – hope for the future, hope for something more.

This series really focused on choices. How choices can lead to good or ill, how we always have a choice even when they are all bad.  I really enjoyed how Ms. Poitevin explored this mythology and this element of choice.  Not only was the series fascinating at the superficial level, but you can read more into it.  I do recommend this series for those interested in an Armageddon themed mythology – it is well crafted.

Series Rating:  A, Loved It

Heaven and Hell are at war

The clock is ticking

Homicide detective Alexandra Jarvis’s niece is missing and pregnant with Lucifer’s child, her sister has descended into madness, and the human race has begun a relentless spiral toward self-destruction that Alex is desperate to stop. Now Michael, the Archangel she holds responsible for Earth’s plight, has returned—and he’s demanding her help to track a missing god.

Fighting for the very survival of his own realm—and that of humanity—Michael’s only chance to defeat Hell lies in returning Heaven’s long-lost daughter to her throne before it’s too late. But first he’ll have to convince Alex to help him—and to keep her out of Seth’s clutches long enough for her to do so.

There can be no right choices

In a desperate bid to save both their worlds, Alex and Michael must put aside their animosity and find a way to work together in the face of increasingly impossible decisions…and unimaginable sacrifices.