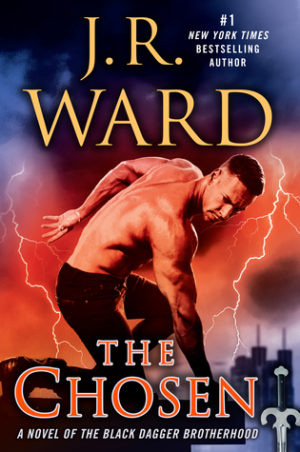 The Chosen is a novel that I have both wanted and dreaded.  This fifteenth book in the Black Dagger Brotherhood series was to be a make or break book for me.  Suffice to say, the WARDen found and worked that special magic.  Though there are some highs and lows, overall I liked it – my crack is back!

From the beginning I have never been a fan of the pairing of Layla and Xcor.  Romeo and Juliet had a more promising future than these two.  At the beginning of the series, Layla was endearing.  Quirky and sickeningly sweet, she was the poster girl for a Chosen.  Once liberated by the Primale, Layla floundered.  However, she still seemed to have the best interests of the species at heart. Once she was duped by Xcor, however, and all but threw herself into his machinations, I was irritated.  Layla went from being selfless to selfish.  I kept waiting for her liaisons with Xcor to be discovered, her betrayal of her “family” brought to light, the train she fought so hard to get on was going to wreck, it was just a question or when and the amount of collateral damage.  It does early in the novel and it is HUGE.  I found myself torn from feeling sorry for Layla and being angry.

Xcor rubbed me the wrong way from the first moment we met him.  I did not believe that I could understand him nor root for him.  As the novel begins, we experience Xcor’s parents at the dawn of his birth.  I never thought Xcor’s life would have been easy, I expected it to be tragic – I wasn’t prepared for how awful it was.  Xcor is a male of worth from birth, but the environments he was raised in, honed him into the male he became.  I feel that it was not his meeting Layla that transformed him, contrary to his belief.  It was the revelation in Payne’s book that he is not the son of the Bloodletter that is the catalyst for his change.  Layla just gives him the new direction that catalyst takes.  Though I disagreed with Layla at times, for Xcor’s sake, I rooted for them to find that HEA.

Layla’s ultimate train wreck of choices affects not only her life and her young, but also the lives of Qhuinn and Blay.  For some reason, the truth of her betrayal brings about the worst in several of the brothers.  Though I do not want to give anything away; Tohr, Qhuinn and V seem to lose their ever-loving minds.  However, once the novel concludes, Layla and Xcor’s pairing is essential for the BDB world.  I do love the end, though incredibly sappy and convenient, it is beautiful.  Even though all ripples of insanity from the train wreck is not resolved, there is a sense of healing for the most part.  I will say that a couple of character’s “change of heart” was a bit…abrupt.  I expected that some would need more time, but maybe it is different for soldiers.

As always with the BDB there are multiple plot lines in the book.  I look forward to seeing how Throe’s plight will continue as there is a huge transformation taking place.  V and Jane have me greatly worried… and I hope to see their story sooner rather than later.  Assail’s plight is only alluded to, but it seems it is his book that will be next.  There is one storyline that I feel is way too soon in the timeline – but that is my personal opinion.  We do discover the replacement of the Scribe Virgin and its awesome – I look forward to watching it unfold further.  In many ways this novel is a huge transitional novel, opening the world for numerous storylines.

Overall, the WARDen has nailed it.  I didn’t think it was possible, but she won me over with Layla and Xcor.  Though the first half was emotionally heart-wrenching (the train wreck we all knew coming), the ending is totally heartwarming.  My heart aches for several characters and I do question the timing for some events, the WARDen has regained my faith.  I eagerly look forward to The Thief to be released next year.

Xcor, leader of the Band of Bastards, convicted of treason against the Blind King, is facing a brutal interrogation and torturous death at the hands of the Black Dagger Brotherhood. Yet after a life marked by cruelty and evil deeds, he accepts his soldier’s fate, his sole regret the loss of a sacred female who was never his: the Chosen Layla.

Layla alone knows the truth that will save Xcor’s life. But revealing his sacrifice and his hidden heritage will expose them both and destroy everything Layla holds dear—even her role of mother to her precious young. Torn between love and loyalty, she must summon the courage to stand up against the only family she has for the only man she will ever love. Yet even if Xcor is somehow granted a reprieve, he and Layla would have to confront a graver challenge: bridging the chasm that divides their worlds without paving the way for a future of even greater war, desolation, and death.

As a dangerous old enemy returns to Caldwell, and the identity of a new deity is revealed, nothing is certain or safe in the world of the Black Dagger Brotherhood, not even true love . . . or destinies that have long seemed set in stone.

One response to “Review: The Chosen by J.R. Ward”