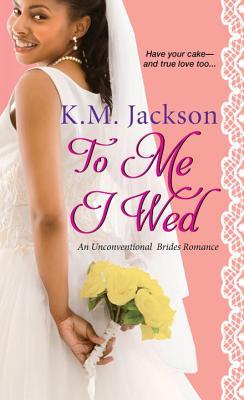 Two peas in a pod are Lily Perry and Vincent Caro. Both struggling small-business owners who are happy with their relationship-free lifestyles. Lily is a successful event planner who has pulled off amazing parties for her several sisters, living up to the “always a bridesmaid, never a bride” lifestyle. Vin recently opened his own restaurant in memory of his mother who always shared her joy of cooking with him. The pair hooked up a while back, and even though it was an intense evening, neither called for a second chance. However, when Lily sees Vin at her sister’s wedding, sparks ignite and neither can rest until they see the attraction through.

To Me I Wed is the second story in Ms. Jackson’s Unconventional Bride series, and unconventional is the best word to describe Lily’s plans. Doing research, Lily comes across an article how a woman, ready to show the world she’s good just as she is, married herself. At first Lily sees this as a potential business opportunity – which I can appreciate. But then she internalizes it, seeing herself in this woman. She gets swept up in the idea, immediately calling her assistant, Tori, and getting Vin’s restaurant to host it!

I have to say, I struggled with Lily. I understood her desire to show the world she’s all good as is. But I had a lot of trouble getting behind the concept of marrying herself. I had hoped it would have been a funny/silly storyline, but Lily was kind of obsessive about her life and the wedding. It was an “I’m gonna show them” kind of thing. She was so serious, not having fun with it at all, which actually made her come off as desperate – not for a man – but for people to believe she’s “okay” as she is.

Similarly, we got a lot of how “okay” Vin is, yet he’s clearly still dealing with his mother’s death and his own father-issues. I loved that he genuinely cares for Lily and pushed her until she gave into her desire. But then their relationship coasts… and when one got too close to the other, they would blow up and push apart. As much as they were falling into one another, they both had serious walls. And we didn’t really see them ever open up to one another. They danced around it, but slammed the walls down hard as soon as one or the other was uncomfortable. They argued about it and instead of moving closer, continually slamming down the barriers.

The author did include some glimpses of genuine emotion, like when Vin kissed Lily with all his heart and at the point right before the wedding. But those moments were so rare. I don’t want to give any spoilers, but I felt even though there is an HFN ending, we never see the couple work things out and get past the messy emotions.

In the end, To Me I Wed was an enjoyable read, but I struggled getting into the story, and then, I found it was lacking solid relationship bonding. By the end of the book I felt that Lily and Vin *could* be a couple, but they really never shared a scene that shows me they will be able to open up and be there for one another.

Have your cake and true love too…”

“She’s done, finished, “had” it. Between her family’s expectations and being always-a-bridesmaid, Lily Perry is fed up with being nagged to find a husband. She’s happy with her life and tired of being burned by nice guys who demand she fit their dreams. So she s going to settle the issue once and for all: by marrying herself. And celebrated chef Vincent Caro’s fabulous restaurant is the perfect place for a big-time, blow-out,

not-hearing-it-any-more wedding. Lily doesn’t care if everyone including Vincent thinks she’s crazy. Especially when his mouth-watering talent and no-commitments style ignites one sizzling, no-strings fling, or two or more.

But no matter how hard they try to keep things light, their relationship keeps getting hotter. The more Vincent helps Lily tackle unexpected trouble, the more he finds she might be everything he s ever wanted. Can she afford to forget caution and finally let go? And can they both take a risk to discover if what they have is meant to last long after the dessert course?