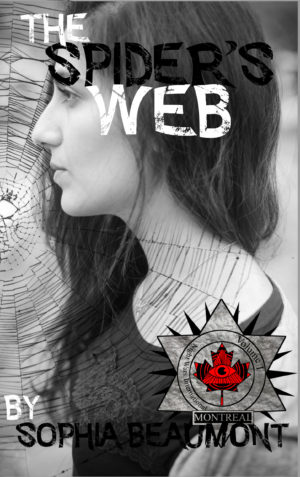 In all honesty, my Aunt Izzy didn’t have any more clue what to do with me than my parents, but she was at least willing to try. She always offered an ear, but was willing to give me space when I needed it, which was almost always.

That night, Izzy went out to celebrate a friend’s birthday. She said she’d be back by ten. I told her not to worry. I had my knitting and the first five chapters of her new manuscript to test-read. Once my ass hit the couch, I wasn’t planning on moving it for anything.

With a pint of moose tracks ice cream, a pair of socks, and the printout, I flopped down on her blue leather sofa and prepared for an indulgent evening alone.

Well, except for Micha. But I let him have the remote and Izzy’s chair, and there was a Firefly marathon on, so he was happy with his space cowboys.

Or I thought he was.

“Please stop staring at me.”

“Sorry.” He turned back to the television.

I scrawled an “s” on the page, since I was pretty sure that even in Izzy’s fantasy world pies weren’t hung for their crimes. “You’re staring again.”

“What are you, some kind of supernatural stalker?” He’d barely been out of sight for longer than it took me to go to the bathroom since I’d woken up in the hospital.

The look he gave me was less than kind. “I’m your guardian spirit. It’s my job to watch over you.”

“Can’t you do something else?”

“Not really. I’ve got a range, but… You know, you weren’t so bothered by it when you first started seeing me.”

“That’s because I was ignoring you because I thought I was crazy and I was more concerned with an impending mental breakdown.”

“Yes, but I’m starting to make peace with it.”

“Which, in a way, means you’re not crazy. Probably.”

“I’m very helpful. You just don’t appreciate my many talents.”

Micha gave a sniff of mock offense. “Just because you don’t appreciate Joss Whedon doesn’t mean the rest of us are lacking taste.”

“Really. And what about all of that late night TV you watch? I know Izzy isn’t the one watching Star Trek and old Judy Garland movies at three in the morning.”

“Hey, the best stuff is on after midnight.”

“Right. So how was the infomercial for the Chop-O-Matic last night?”

“It was the Super Chop-O-Matic, for your information, and it was surprisingly entertaining. Besides, what else am I going to do while you’re asleep?”

I rolled my eyes and went back to my sock and my editing, but Micha was now officially ignoring adventures of the Serenity and her crew.

“You’re grinning at me.”

“I’m smiling. And contrary to what you seem to believe, a smile does not make a person untrustworthy.”

“Whatever. Why are you smiling at me like a crazy person?”

He shrugged. “Well, you’re talking to–”

“Gah!” I threw down my knitting, swatting at the back of my neck.

“What? What is it?” Micha demanded. In an instant he was right beside me.

“Something bit me!” I could feel tiny legs on my skin. I brushed it off, flipping my hair over my head to shake it out.

A hairy black spider the size of a nickel landed on the hardwood floor. I screamed and stomped on it with my flip-flop.

“What is going on with these stupid spiders? I’ve been seeing them all over the place!” I touched the back of my neck where a welt was already forming. I ran to the bathroom and used Izzy’s compact to try to get a better look at it. “You don’t think that’s poisonous or anything, do you?”

“I think it’s worse than poisonous,” Micha said, his eyes on the floor. I looked down. From a tiny gap where the baseboard met the floor, a line of spiders was emerging. I screamed and stomped on them. But then there were more–from under the cupboard, behind the medicine chest. In through the window. From every crevice they came, and my dollar store sandals couldn’t keep up.

“I’m crazy now, right? Please tell me this is a hallucination!” I cried, stumbling out of the bathroom. There were more in the hallway, crawling down the walls and out from under the carpet. They swarmed over my feet, landed on my arms. They bit faster than I could brush them away.

There was a sudden burst of light from my left, and a chunk of the spiders vanished.

“Concentrate! They’re made of spiritual energy, just like me. You can make them go away!”

I was in tears by that point. My skin was inflamed, red and itchy and sore all over. I could hardly breathe, but I couldn’t tell if it was from panic or the bites.

Another burst of light, but it wasn’t enough. They just kept coming.

Micha stepped in front of me and grabbed my arms. “Evie! Look at me!”

Silver-grey eyes filled my vision. “You have to calm down. You can do this. Just picture a circle of white light all around you. Nothing can get past.”

“You can! Now listen to me!” He gave me a shake, just once, just hard enough to get my attention. I squeezed my eyes shut and tried to do what he said.

“Are you picturing it? Now put everything you’ve got into it!”

Tiny legs, all over me. Biting, eating away at my whole body. Under my clothes. In my ears, my mouth–

The shrill scream tore from my throat. Something in my head shattered and I was left weak-kneed, leaning on Micha. When I opened my eyes, they were gone. I was left exhausted with only a few bites on my arms and legs.

“I thought you said they weren’t real,” I said, cringing at a particularly nasty looking one.

“Most of them weren’t. I think there must have been a few, just nearby ones that answered the call, but most of them were…an illusion, for lack of a better word. A very powerful illusion.” He pushed my hair back from my face. He looked as relieved as I felt.

“What was that? Why were they here?” Dammit, I was going to start crying again. I’d already done too much of that today.

“I don’t know. But they’re gone now. We’ll find a way to keep them from coming back.”

I was still shaking. “I need a shower. And bug spray. Lots and lots of bug spray.” Micha started to object, but closed his mouth. I looked over his shoulder into the bathroom. “Not that shower.” Izzy would have to forgive me for using the master bath just this once. There was no way I was taking off my clothes in there. In fact, I might not ever be able to use it again for anything.

After being released from a Toronto psych ward, Evie decides that her life needs a drastic change. Moving 500 kilometers east to stay with her aunt in Montreal, however, is not turning out as expected. Though she loves the city, she can’t outrun the problems that drove her to the edge in the first place.

Recovery might be a little easier if not for Micha. Handsome, kind, always willing to help Evie or cheer her on–and completely invisible to everyone else. He seems to think he’s some kind of guardian angel, and she might need one now that things have gone from bad to just plain weird.

It started with the spiders. Then the owls started following her. Ghosts, goddesses, and secret societies are just the icing on the cake. She’s going to need help from some very powerful friends if she wants to make it to her next birthday, but when one of those friends is the goddess of the underworld, her guardian angel might have to start working overtime.