New York Times and USA Today bestselling author Shannon Stacey lives with her husband and two sons in New England, where her favorite activities are writing romance and really random tweets when she’s not driving her RZR off-road. She loves mud, books, football & watching way too much TV.

I’ve lived in New Hampshire several times, but I moved here for the final time a little over twenty-five years ago. My husband was born and raised here, and both of our sons were born here, so New Hampshire is definitely home. (Though I’m from Massachusetts and keep that flatlander flame burning in my heart.)

Definitely, but it goes deeper than the beauty of the state and the variety it offers as a setting. I’ve lived a lot of places (Air Force kid) and New Englanders are just my kind of people. And those are the people I want to write about, showing their lives and families along with their journeys to happily ever after.

Most of my books take place in New England. The Kowalski Family series is split between New Hampshire and Maine. My Boys of Fall series was set in northern New Hampshire, and the Boston Fire series is set in Massachusetts. Whether I want woods and mountains, cities or the ocean, New England brings it.

There’s always a brief window when I love spring, because hibernation time is over and we get to open camp and see our friends after a long, cold winter. But autumn is my favorite time of year. After a hot summer of riding dry and dusty ATV trails, the cool fall days are the best for four-wheeling. The bugs are gone, there are puddles to splash through, and the leaves are pretty. 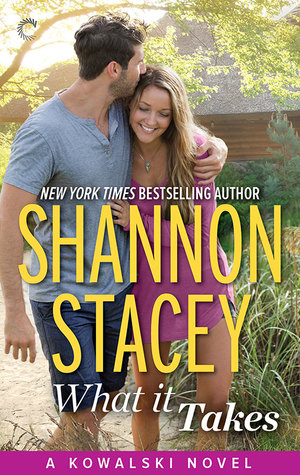 Revisit all of your Kowalski favorites while falling in love with a brand-new romance in this reunion novel from New York Times bestselling author Shannon Stacey.

Laney Caswell is looking for a change. A decade’s worth of less-than-happy matrimony behind her, she wants peace—movies, books and, best of all, a new job at the Northern Star Lodge in Whitford, Maine. Spending the summer living in a camper is her chance to rediscover what makes her happy, and a perfect transition to her new life.

Being a paramedic in Whitford is nothing like Ben Rivers’s city life, but when Josh Kowalski offers him the job, the lure of his hometown is too much to resist. Also too much to resist: Laney Caswell. Ben always thought he’d have a wife and kids, a happy family like the Kowalskis have all built, but he never made time in his life. Now he’s found a woman who draws him like no other and helps him dream again—and the last thing she wants is a husband.

When the annual Kowalski family camping trip is moved to the Northern Star, both Ben and Laney are surrounded by the kind of happiness they’ve always wanted but never had. It just might be theirs—if they can put aside the past and reach for it together.

“Sit back down and let me put on a bandage on it. Paramedic or not, it’s harder with one hand.”

Doing as he was told, Ben sat back at the table and offered his hand. “Usually I’d skip this part, but I’m afraid if it gets infected, you might try to give me a shot.”

“Funny.” She opened the tube of ointment and set it aside. “So you grew up here, but Rosie said you moved to the city. She didn’t say which city, though.”

“I’ve been in the Lewiston-Auburn area for the last eight or nine years, though I started on the coast. It kept me pretty busy.”

“This will be a big change of pace for you, then,” she said, opening the wrapper for the adhesive bandage. After squeezing a little ointment onto the pad, she reached for his hand.

“It seems that way but, really, this job has its own set of challenges. The city was busy, but I had a fully stocked ambulance, paved roads and the magic ability to make all the stoplights green. Here, I’ll have fewer calls, but I have to find my patients out in the woods, treat them with what I can fit in the cargo boxes on my ATV and then figure out how to get them to either an intersection an ambulance can get to or a clearing where a helicopter can land.”

Instead of holding his hand down this time, Laney took his fingers and lifted it. He watched her brows draw together and caught her bottom lip between her teeth as he tried not to laugh. Laney seemed to have a good sense of humor, but she’d been feeling embarrassed just a few minutes ago and he didn’t want to bring that back.

“This isn’t going to stick well,” she said as she laid the bandage across the cut and pressed the adhesive against his skin. “Maybe I should wrap it with gauze to hold it on.”

“It’ll get me home and even if you wrapped it, I’d have to change it when I shower anyway.”

She was still holding his hand and though he knew she was doing it thoughtlessly because she wasn’t done fussing over him and she was talking, he liked it. It was weird, since he didn’t know this woman, but there was something about her that made him want to change that.

“I’m sure. I need to get back to the station and do some paperwork before I head home, so there will be plenty of time for that medical gunk to soak in.”

She let go of his hand, but she laughed again, which was just as good. “I guess I don’t have to give you aftercare instructions.”

She smiled up at him as he stood. “I’ll be here for the summer.”

Ben forced himself to thank her again and then walk out the door, when he really wanted to pour them each a glass of lemonade and go sit out on the front porch with her.

There would be plenty of time for getting to know Laney Caswell.

Once the kitchen door had closed behind Ben, Laney bent forward and let her forehead hit the big wooden table with a thunk.

I’ll be here all summer.

Had she really sounded as breathless as she had in her own mind? Seriously, she couldn’t have issued a more obvious invitation short of breaking out card stock and a calligraphy pen.

She should put the first aid box away. Then she should look at the list Rosie had left for her on a side table in the living room, which detailed the daily housekeeping tasks for the lodge and campground. Andy had wanted to introduce Rosie to a couple who’d stopped by to visit some friends who were camping there, so she’d sent Laney to look over the to-do list so they could discuss it later. And then she’d gotten sidetracked by a sexy paramedic with an injured palm and a wicked grin.

Instead of doing the things she should be doing, Laney sat there with her head on the table, thinking about Ben’s hands.

He had strong hands. Not rough, but the skin on his fingertips was thick and he had calluses across the pads. And his forearms…

She sighed, a sigh so deep it seemed to come from her toes, and then thumped her head on the table again. Never in her life had she been attracted to a man’s forearms. But she’d played hell concentrating on the arm stretched out to her when she kept glancing at his left arm. He’d rested it casually on the table and the first time she’d tried to grab the paint chip with the tweezers, the fingers of that hand had curled into a fist. The action made the muscles in his forearm tense and Laney’s mouth had gone dry.

It was a miracle, really, that she hadn’t stabbed him with the tweezers. Either he hadn’t noticed her reaction or the subsequent shift of her body to move his left arm out of her sight line, or he’d been too polite to mention it.

Hopefully the paramedic wouldn’t be spending too much time at the Northern Star, she thought as she raised her head and stood.