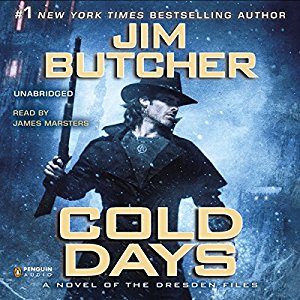 Cold Days opens with a fully alive, yet still recovering, Harry under the care of Mab, who is determined to shape him into her active Winter Knight. It takes a few chapters, but eventually, Harry makes his way back to Chicago and reunites with his friends and brother.

Cold Days tackles a lot! Not only is Harry back from the dead, but he’s taken on the mantle of the Winter Knight. He’s got to figure out if he should and how to fulfill Mab’s first task for him, save Demonreach from exploding, which in turn will save all of Chicago, deal with a new and extremely powerful player on the paranormal scene, and by the way, he has a parasite stuck in his head. Honestly, it was all a bit too much for me at times. That, coupled with the several too-close calls, made the book drag a bit because it was over the top. Yet, it was filled with undeniable wit and a sense of humor that complements Harry’s new found fearless attitude.  My new favorite word may just be Vajazzled… referring to the “costume” of jewels Mauve wore along her woman parts (and nothing else).

The best parts of the book came when Harry reconnected with his friends, most especially the scene with Thomas. I was in tears. And Karen… she’s really changed since his death. But I was so glad to see she and Harry working together.

The narration was excellent. There were times of fast-paced bantering, when dialogue tags were dropped, and I clearly knew who was who. There were scenes of heighten emotions that were so palatable, my own heart nearly broke. The inner battle of Harry the Wizard vs Harry the Winter Knight rivaled Andy Serkis’s performance as Smeagol/Gollum in The Lord of the Rings trilogy. The vast array of voices, both human and other, are unique, distinct, and perfectly formed. Listening to James Marsters is like listening to a cast of dozens.

In the end, I enjoyed Cold Days, even though I felt it went on a few too many chapters. But knowing I only have one book left until I’m caught up leaves me a bit melancholy. I’ve enjoyed exploring this series and don’t want to have to wait for more chapters from Dresden’s life.

My Rating: B
Narration: A+