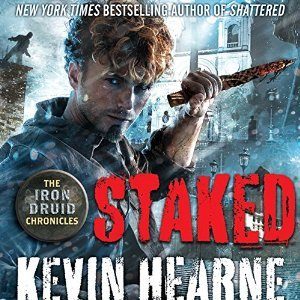 Staked opens with Atticus back in Toronto, a place he swore he’d never visit again. He’s there to steal the list of all vampires in the world. While there, he runs into Joseph – the head of Hammers of God, who has retired and married. Atticus learns that Joseph has seen the errors of his youth, and now Joseph wants to help Atticus kill off the vampires. We also finally learn what happened when he was in Toronto years ago, under the name of Nigel.

Meanwhile, Granuaile is in Asgard with Oden, working on a way to remove Loki’s mark. And Owen has moved to Flagstaff with Greta, where he plans to train six young humans to become Druids.

As with the previous book, Staked is shared in three different POVs: Atticus, Granuaile, and Owen. This time around, there are actually three separate stories, as each of the Druids is on his/her own journey. I wasn’t as confused this time around since I was used to the jump from character to character.

While I truly enjoyed listening to Staked, Atticus’s life weighs heavily on his soul, and it brought me down at times. Also, I continued to worry about what would happen to the characters, especially with Jesus’s dire prediction in the previous title. I was waiting for the proverbial shoe to drop, and didn’t feel lighten by the end of the book. I don’t like feeling this way. But as Owen would say, Atticus has really cocked things up, and I fret at how far-reaching his actions will reverberate.

Although at the beginning of the book I felt the narration was off, it settled back into its usual patterns after a couple chapters. Mr. Daniels’ voices are all pretty consistent from the last book – Granuaile’s voice remains not as light as she was when we first started hearing it – and I think it’s because she’s not the same wide-eyed girl she once was. But Luke Daniels continues to provide a top-notch performance, and he does a great job with all the voices, especially the trolls.

Staked is emotionally dark at times, which makes for a gripping, if not heart-wrenching, story. I loved the reintroduction of the Witches and Rabbi Joseph. And while I enjoyed the various journeys each Druid took, I really want the trio – or at least Granuaile and Atticus – to work together, and not be separated for most of the book.

Rating: B+
Narration: A-