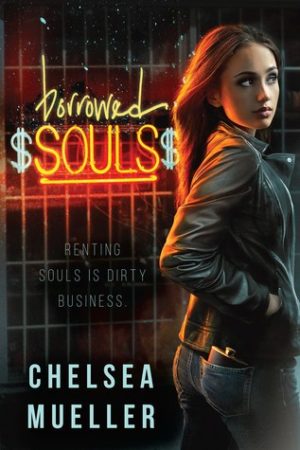 Callie’s brother Josh is in trouble and the only way to get him back alive is to do the bidding of drug lord Ford. For her task, Callie must borrow a soul from the Soul Charmer and commit a crime. But it’s not that easy. The Charmer insists Callie work for him for two weeks in exchange for the soul saying she doesn’t have enough cash to outright loan it. The Charmer is intrigued by Callie’s soul, and Callie may be getting way more than she bargained for.

In Ms. Mueller’s fascinating new Soul Charmer series, souls are pawned for cash or other favors. The Soul Charmer is able to wield “soul magic,” allowing him to take souls from and place souls in bodies. One can trade their for a short time to get cash, or borrow another to sin without repercussions on your own soul. The mythology is completely unique and unlike anything I’ve read before, which is one of the reasons I was drawn to Borrowed Souls.

As the first book in a new series, there is a lot of world-building, but it’s not heavy-handed or shared via info-dumping. The author leaves clues about the world in dialogue and descriptive scenes. The reader learns about soul magic as Callie is exposed to this dangerous trade. Callie is rather naive at times, even though she comes from a rough childhood and her mom is a bit of a con artist. I like that Callie has to work for her badass UF heroine status; she’s not born with powers or have innate fighting abilities. Try as she might, Callie just can’t be mean, which gives her a soft edge. Callie makes mistakes, sometimes costly ones, but she seems to learn from her situation and move forward.

Callie works as part of a soul repo team for two weeks to earn a day use of a soul. The Soul Charmer pairs Callie with Derek, the muscle to shake up those who are delinquent on returning borrowed souls. Derek is the strong, silent type, but Callie forms a bond with the big guy fairly quickly. She also has difficulty hiding her attraction to Derek, and soon the pair find themselves a couple. I LOVE Derek. He’s kind and good, giving someone for Callie to trust. She’s got so little good in her life, and Derek fills all the nooks and crannies without taking over her life. He’s patient and understand, something Callie hasn’t experienced before.

While I love this new world and mythos, I struggled a bit with the storytelling. I think what is niggling at the back of my mind while reading Borrow Souls was that there were things that happened and they just weren’t fleshed out enough for me. For example. After Callie accidentally burns Bianca and then the next day goes to her own place of employment, two therapists jump on her for burning Bianca. How did they even piece all that together?! Too often there were unfinished thoughts or conversations, with much left hanging. I questioned if I was supposed to understand what happened, or did the author purposely leave things open-ended.

In the end, I am completely fascinated by the world of soul-swapping and ambiguous magic. Callie is a wonderful UF heroine because she has to earn her badassery the hard way, working her butt off to survive and protect those she loves. I love Derek’s role as protector and lover – Callie deserves to have some good in her life, even if she doesn’t think she does. The world building is strong, leaving a few holes that should be fleshed out in future titles. At times the writing is a bit underdeveloped, but overall a good story. I look forward to what happens next in Ms. Mueller’s compelling Soul Charmer series.

One response to “Review: Borrowed Souls by Chelsea Mueller”