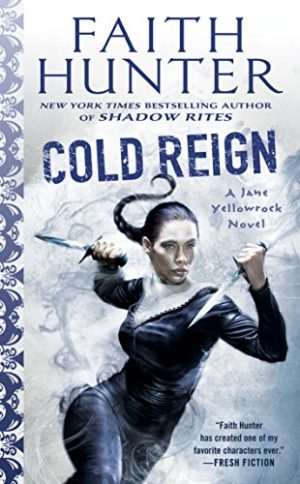 All of the familiar players are back in the eleventh story in the Jane Yellowrock series: Jane and Beast, the Youngers, Bruiser, Leo, Edmund, Derek, Grégoire, the Robere twins, Gee, Brute, Ricky, etc. Leo, of course, is so insufferably arrogant (yet necessary) that I kind of wished Jane would just kick him, but Jane’s family, Clan Yellowrock, becomes more endearing and fascinating by the minute. This growing assemblage of personalities is my favorite part of Cold Reign, and Jane is infinitely better for their presence in her life.

In Cold Reign, Jane is once again trying to stop an attack aimed at Leo Pellessier, the Mithran Master of the city of New Orleans. Despite Leo’s secrecy and manipulations, Jane is now fully aware of what might be lost if Leo falls, and knows that turning her back on it all would be far too costly for everyone, including her. To say that it’s a complex situation is a gross understatement, but Jane’s learned a thing or two since her arrival and uses it to her advantage without a flinch.

As to Jane, she’s become one of my favorite characters ever, and I truly feel invested in the life she’s been building for herself. She’s got scars. Lots of them. But, she’s earned every one, and has managed to find some happiness, too. No longer the obstinate, wounded loner, she’s a richer character all-around, and in Cold Reign, it seemed more evident than in any of the previous novels.

Jane’s evolution is reflected in the narrative as a whole, and Cold Reign benefits from the effect it has on the other elements of the story. There are some really funny moments sprinkled throughout, made even more so because of their irreverence and borderline impropriety, thanks to Jane’s “quirkiness”—which seems to be catching. Likewise, there’s serious romance going on here that Jane absolutely deserves, even if she’s disgusted with herself just a little. I thought it was completely wonderful.

Eleven books in, and the Jane Yellowrock series keeps getting better and better. And unlike many other long-running series, it has remained consistently strong and downright riveting more often than not. Jane still stumbles occasionally, but rarely now, and her determination to learn whenever she does makes me love her even more. While Jane’s understanding of the world she’s become embroiled in continues to grow, it is her own self-realization and acceptance in Cold Reign that is most impressive. This series is a definite favorite of mine by now, and I can’t recommend it highly enough.

Jane Yellowrock is a shape-shifting skinwalker…and the woman rogue vampires fear most. Jane walks softly and carries a big stake to keep the peace in New Orleans, all part of her job as official enforcer to Leo Pellisier, Master of the City. But Leo’s reign is being threatened by a visit from a delegation of ancient European vampires seeking to expand their dominions.

But there’s another danger to the city. When she hears reports of revenant vampires, loose in NOLA and out for blood, Jane goes to put them down—and discovers there’s something unusual about these revenants. They never should have risen.

Jane must test her strength against a deadly, unnatural magic beyond human understanding, and a ruthless of cadre of near-immortals whose thirst for power knows no bounds…