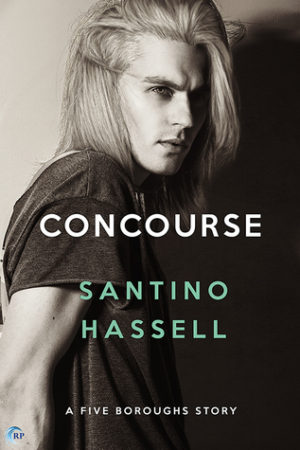 Amid the shining lights and luminaries of New York, Ashton Townsend glimmers more brilliantly than the rest. Young, rich, and undeniably beautiful, he’s either desired or envied—or both—by just about everyone. He’s also lonely and brutally aware that nobody really knows who he is beneath the façade he’s created. Nobody except his most cherished friend, and most elusive desire, Val.

Valdrin Leka, on the other hand, is a broodingly handsome competitive boxer on his way to going pro for all the wrong reasons. His mother’s full-time position as nanny for the extremely wealthy, entitled Townsend family made growing up in their shadow a bitter pill to swallow—the only exception to that opinion being Ashton. But, as much as he’s always wanted Ashton, letting himself fall completely would surely be a one-sided heartbreak waiting to happen. Or would it?

While I’ve loved each of the Five Boroughs stories—and have a particularly soft spot for the first two—Concourse is exceptional. I liked both characters tremendously from the beginning, and I could not stop worrying about them throughout the entire narrative. The tension that had been building between Ashton and Val for years off-page was a nearly tangible thing, their behavior towards one another practically screaming its veracity and making their shared history easy to accept. The weight of Val’s secrets was likewise dark and viscous, threatening at any moment to destroy the happiness they were so close to realizing.

I also found the writing itself in Concourse to be about as perfect as I could have hoped, and there were quite a few passages that tugged at my heart during my reading. Val and Ashton’s shared hunger for affection is indisputable, and Mr. Hassell once again rips away any artifice with an emotional simplicity that was both irresistible and believable.

“There would have to come a point when I drew boundaries about all this touching, but I couldn’t bring myself to do it yet. Not when he was the only person whose touch I actually felt.”

In addition to Val and Ashton, Concourse introduced some interesting new characters as well as allowed me to get to know some of the others who have piqued my curiosity for a long time now a little better. Val’s sister Hana, his friend Matt, and even Luis, his main competition at the gym, were all welcome additions. I also thoroughly enjoyed seeing more of Stephanie and Angel from the “Queens Squad,” along with Meredith Stone and her ongoing attraction to Tonya. It certainly didn’t hurt that Nunzio, who is still my favorite character of the series, made an appearance or two, and delivered another solid quote that stuck with me:

“…there’s not always weakness in forgiveness.”

With the addition of Concourse, Santino Hassell has ensured that the Five Boroughs series remains among the best I’ve had the pleasure of reading. Though it’s listed as a standalone, there’s no way I could ever endorse one of these stories without strongly recommending the others as well. Val and Ashton are wonderful characters, and learning the truth about Ashton—particularly in contrast to the little we were shown of him in previous novels—makes him even more remarkable. There simply isn’t anything I didn’t like about Concourse. And the paperback looks absolutely perfect on my favorite bookshelf.

Ashton Townsend is the most famous celebutante of Manhattan’s glitterati. The black sheep of his wealthy family, he’s known for his club appearances, Instagram account, and sex tape. Most people can’t imagine him wanting for anything, but Ashton yearns for friendship, respect, and the love of his best friend—amateur boxer Valdrin Leka.

Val’s relationship with Ashton is complicated. As the son of Ashton’s beloved nanny, Val has always bounced between resenting Ashton and regarding him as his best friend. And then there’s the sexual attraction between them that Val tries so hard to ignore.

When Ashton flees his glitzy lifestyle, he finds refuge with Val in the Bronx. Between Val’s training for an upcoming fight and dodging paparazzi, they succumb to their need for each other. But before they can figure out what it all means—and what they want to do about it—the world drags them out of their haven, revealing a secret Val has kept for years. Now, Ashton has to decide whether to once again envelop himself in his party-boy persona, or to trust in the only man who’s ever seen the real him.