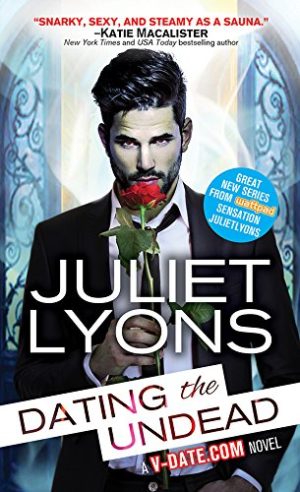 It’s been awhile since I’ve read something paranormal. I miss it. I was really excited about reading Dating the Undead, the first title in the Undead Dating Service / V-Date.com series.

Ms. Lyons did a fabulous job setting up her vampire world so readers would easily buy-in and suspend belief for the rules of her universe. Which is important when there’s human-vampire interaction going on.

Silver is an independent young woman and she is sassy, stubborn, pretty much fearless, and able to function on her own without the assistance of a man. I love her unique way of dressing, and her thought process. Silver is who I imagine myself to be, were I 20-something and on the market 🙂 We get a lot of information about her, too. I like knowing her background and how she came to be the way she is.

Logan is a vampire. He’s almost 200 years old. He’s not afraid to tell Silver about his past, either. Mostly. What I like about Logan is that he’s honest with Silver (to a point). He is a bit of an AlphaMale, but I don’t think he crosses into alpha-hole territory. Which is important. Although, he does have a few missteps with regard to info that should have been divulged to Silver much sooner—but then again, it creates conflict and we all need conflict in our books!

Not only were the sexy times super hot and well-written, but I definitely saw the relationship build between Logan and Silver. Initially, it felt like a huge case of doing-it-like-bunnies lust, but the intimacy between the couple increased in wonderful ways that made the ‘I love yous’ believable.

I really was impressed with the whole vampire world. The hierarchy. The rules. It all made so much sense to me.

While there was some suspense tossed in along the way, it enhanced the plot and the overarching romance for me.

I can’t wait to read the next installment of Undead Dating Service—and I hope we get to see more of Silver and Logan. A second title in the series is due out October 2017.

What Silver doesn’t know is that the site is more dangerous than she could ever imagined, and soon she’s in over her head. When Logan returns, sparks fly and attraction sizzles, but they’ll have to escape some very real demons if they have any chance of lasting forever.