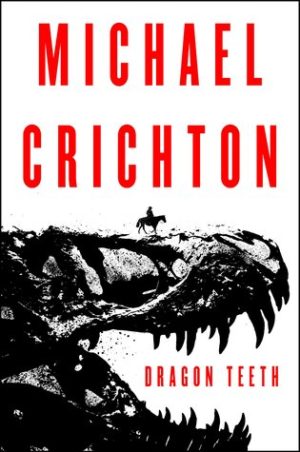 Dragon Teeth is a wonderful historical fiction set in the old West during the time of the infamous Bones Wars; a time when two great paleontologists raced to uncover and collect the most impressive dinosaur discoveries. Released almost ten years after the author’s death, Dragon Teeth has the feel of a genuine Crichton story. I don’t know how much of the book was edited and filled in by a ghost-writer, but it was done very much in the vein of his body of works.

The story follows Yale freshman William Johnson, who decides to worm his way into Professor Marsh’s government-funded expedition to dig for fossils. Why would this carefree and somewhat reckless young man take on such a dangerous journey in a time when tensions are high between the white settlers and Native Indians? Because of a bet. Yep… a bet that changed his entire life.

Professor Marsh is a highly suspicious, nearly mad man who assumes the poor, naïve Johnson is a spy for his adversary, Cope. This leads Marsh to abandon Johnson in Cheyanne. So when Professor Cope shows up and offers Johnson a spot with his crew, he feels he has little choice. And although they are forbidden to head out from Fort Benton, Cope and crew slip out to dig bones.

The story follows Johnson has he experiences firsthand how difficult life in the West was during the late 1800’s. Yet Johnson finds a way to persevere, developing an unhealthy fixation on protecting the dinosaur bones in his care. I empathized with poor Johnson, who is naïve and in way over his head. He’s an unknowing pawn that could be crushed in the race for supremacy between two Barons of Bones. His demeanor and the situations he’s placed in created an emotional tie to his character, keeping me invested in his entire story from beginning to end.

Dragon Teeth is a highly interesting and engrossing tale. I have always loved Crichton’s matter-of-fact writing style, and I can’t distinguish between fact and fiction. It’s a gripping way to tell a story. Crichton also adds details that make the scenes pop and come to life. The story is that of a young man’s rough journey to becoming his own man. He had a summer that changed him, and hopefully his life will be richer for it. The book is all about the journey, and I enjoyed going along for the ride.

The year is 1876. Warring Indian tribes still populate America’s western territories even as lawless gold-rush towns begin to mark the landscape. In much of the country it is still illegal to espouse evolution. Against this backdrop two monomaniacal paleontologists pillage the Wild West, hunting for dinosaur fossils, while surveilling, deceiving and sabotaging each other in a rivalry that will come to be known as the Bone Wars.

Into this treacherous territory plunges the arrogant and entitled William Johnson, a Yale student with more privilege than sense. Determined to survive a summer in the west to win a bet against his arch-rival, William has joined world-renowned paleontologist Othniel Charles Marsh on his latest expedition.  But when the paranoid and secretive Marsh becomes convinced that William is spying for his nemesis, Edwin Drinker Cope, he abandons him in Cheyenne, Wyoming, a locus of crime and vice. William is forced to join forces with Cope and soon stumbles upon a discovery of historic proportions.  With this extraordinary treasure, however, comes exceptional danger, and William’s newfound resilience will be tested in his struggle to protect his cache, which pits him against some of the West’s most notorious characters.

A page-turner that draws on both meticulously researched history and an exuberant imagination, Dragon Teeth is based on the rivalry between real-life paleontologists Cope and Marsh; in William Johnson readers will find an inspiring hero only Michael Crichton could have imagined. Perfectly paced and brilliantly plotted, this enormously winning adventure is destined to become another Crichton classic.