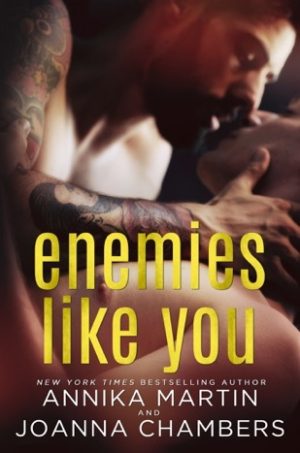 NOTE: The authors recently released a free “prequel” novella, Enemies with Benefits, prior to the release of this book. It is actually the first eight chapters (about 25%) of Enemies Like You. So if you have read the prequel, the authors direct you to start at Chapter 9, which is what I did. If you have not read the prequel – no need to pick it up.

CIA operative Will is set to kill his enemy, Polzin. It’s a personal kill since Polzin is responsible the deaths of so many of Will’s brothers-in-arms. Kit has been deep undercover for two years, forced to protect Polzin as his bodyguard. Kit must keep the dirty Russian alive until he completes his own, secret objective: locate the Roc file. Now the pair face off in a deadly match that neither can walk away from.

Will and Kit begin the story as two sides to the same coin. Both ultimately after the same goal – eliminate Polzin – but with opposing methods and reasons. I’m glad that through their relentless pursuits, each learns the truth about the other, allowing the pair to team up and work together. I appreciate that the authors didn’t drag out the stand off between the pair, rather they used each encounter between Kit and Will to slowly wear both down. This ultimately changes both men, giving them the space to grown and open up. And I loved watching the pair evolve before my eyes, maturing and joining. I loved how each scene brought them closer together and changed each just a little bit, until they are a solid couple in love by the end. I look forward to more challenges and Kit’s “Kate persona” taking on Will, but I like that Kit has a soft, vulnerable side as well.

The espionage story is a good one. Like a classic spy thriller, there are several players in action, and the reader doesn’t fully understand all the pieces until nearly the end. I enjoyed watching Will and Kit figure out every step and finally getting to the end game. I was, however, a bit disappointed in the ending. I felt there was a distinct lack of closure on a specific character and what happened after the final showdown. Whether the authors were deliberately obtuse, or I was supposed to make assumptions based on the little information offered, I felt it was almost anticlimactic after so much effort and time went into finding the Roc file. I just felt a lack of closure on the storyline, but maybe that is on purpose and subsequent titles will go into more detail. Or maybe it is supposed to be enough that Will and Kit ended together and have their HFN. But I wanted more, now!

Enemies Like You is a promising, sexy start to what I hope will be a formidable series. I don’t read a lot of suspense romance, but this story had a great balance between action, suspense, storyline, and romance. The pair can be dangerous and have an edge, but also be generous and kind to one another.

Will has never met anyone like Kit. He’s arrogant. Gorgeous. Lethal. The most expensive bodyguard money can buy.

And Will can’t seem to resist him.

Just one problem: Will has vowed to kill the billionaire that Kit is hell-bent on protecting.

And Kit has secrets, too—his own reasons for sacrificing his soul, piece by painful piece, to keep one of the worst men on earth alive.