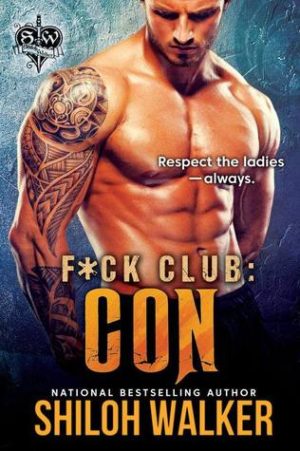 If you haven’t read Riley’s book, get on that. It sets up the premise for the series wonderfully. But, here’s what’s going on. Riley & Con are male escorts…with benefits. Their friend, Shame, was part of the operation. Riley concocted this business to make ends meet when he took guardianship of his two younger siblings when their parents died in a car crash as he built up their legit business, a bar. When their sketchy business fell under scrutiny of law enforcement—and Riley had a love interest come into his life (again)—the F*ck Club disbanded and they’ve flown under the radar of the cops. There’s more that happens, but you’ll have to read Riley’s book to find out. 🙂

Con is the middle child, and he’s really in-tune with what’s going on with his sibs. He sees more than people want him to, at times, and he’s learned to keep it to himself, mostly. Then, Shawntelle comes into his life as a bartender in his bar. Unfortunately, Con has vowed to never sleep with their employees (good man, that Con). And their attraction is crazy intense. Boo.

But Con’s SpideySenses are all a-tingle because there’s something Shawntelle is hiding. And he doesn’t like it. He dismisses his intuition, though. Gah! It’s really hard to review a Shiloh Walker book without spoilers.

What I liked about this little novella was that it was fast-paced. Before I knew it, I’d read the whole thing and had that satisfied smirk on my face. Mr. VampBard pretty much says, “Done with your book? That good?” now. I loved how the story between Con and Shawntelle played out. There were things that surprised me, and things that made me tear up. Seeing the growth in Con—as well as Shawntelle—was satisfying…and the sexy times were HOT! I honestly can’t wait to get my hands on Shame’s book after reading Con’s.

After a run-in with a cop, former male escort Con, along with his brother Riley and best friend Shame, decided it might just be best to hang up their…hats and retire from the business of being paid to pleasure.

After all, they have a profitable business going with their new pub. No reason to ruin a good thing and Con is more than happy to keep pleasing the ladies—just…no longer as a job. Finding a date or company for the night has never been an issue for him, either. He’s been told more than once that he can charm a tiger out of its stripes. But lately a new hire at the bar is turning the tables on him—she is the one charming him, twisting him up into knots and getting him so worked up, he can barely see straight.

In his rather expert opinion, Shawntelle Callahan is nothing less than a queen.

And she’s a queen on a mission, too. Even as tangled up as he is over her, he can see that. First she tries to coax him out of retirement for one last engagement. When that doesn’t work, she sets out to drive him crazy. After finally admitting that she’s a writer who’s looking to do a story on male escorts, Con realizes it will be best to just stay away from Shawntelle. Sure, she says she’s just looking for some hands-on information but he knows there’s more to it than that. There are secrets in her eyes, barely hidden lies and doubt.