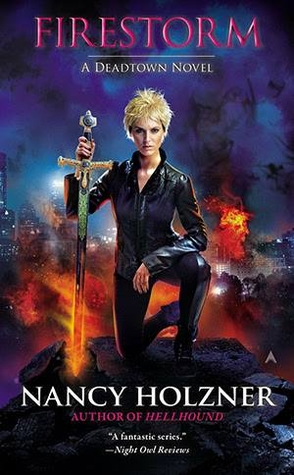 It’s been 3.5 years since the release of the previous Deadtown story, Hellhound, and I’ve been stalking the author, er… um… patiently waiting the release of the sixth and final story of Vicky Vaughn’s tales. As always, the story opens with Vicky in action, this time trying to banish a group of sirens who are causing people to plunge to their deaths off the Tobin Bridge and into the Mystic River. Aunt Mab is still around, there to help Vicky prepare for the upcoming final showdown with longtime demonic nemesis, the Destroyer.

Firestorm is the exciting climax of and fitting conclusion for Ms. Holzner’s amazing Deadtown series which features a “Buffy-like chosen one” set to save the world from evil forces. The book is the culmination of every title that came before it, so you definitely want to start back at the beginning. I was concerned that with so much time passed and the intricacies of this urban fantasy arcing plotline, that I would be completely lost and playing catch up. But between reading my previous reviews and the author’s expertly placed reminders of important events, I was able to jump right into the story.

In the previous book, Vicky allowed the Goddess Ceridwen inside her, and now both the Destroyer and Ceridwen are fighting for control of her body. It’s a seesaw battle, and poor Vicky is the one suffering its impacts, like when the goddess took over and when on a tear through the bars of Deadtown. The back and forth wreaks havoc on Vicky’s mental and emotional states, leaving her vulnerable and open to making poor decisions. She feels like she’s constantly being played or used and that she’s fighting against her own destiny. I liked that Vicky had to go through this final set of trials, helping her to realize what is truly important. I also appreciated that the author made sure to tie up all the loose ends with the major characters. No spoilers, but I was happy with everything!

Because the focus of the book is the FINAL BATTLE, Firestorm didn’t have a standalone mystery or storyline like each of the previous titles, and I missed that aspect of Ms. Holzner’s storytelling. At times I felt the storytelling suffered from ADD because it jumped from one thought to the next, and the plot wasn’t as complex as previous tales. However, the story as shared was appropriate since it is the series end. There were very few side stories except for Mab’s sacrifices and Vicky’s decisions. There was a lot of action, some of it violent, but never gratuitous. Also, the story took some dark turns. At one point, I wondered how the world would be able to recover from the events and how there could be a happy ending. But readers were left with closure, and a suitable, solid, happy ending. And we got to see

In the end, I am SOOOOOOO grateful that this book was finally written and released. Firestorm is an appropriate end to Vicky’s story, but the door was left open for the reader’s imagination to plan many more adventures. Deadtown is one of my favorite urban fantasy series, and I highly recommend you check out this quirky, humorous, complex series!

Series: A- Enjoyed it a lot

When Vicky allowed an ancient goddess to possess her, she had no regrets—it was the only way to protect the people she loved. But now Ceridwen, locked in a power struggle with the Hellion that long ago claimed Vicky with its mark, refuses to leave. Both beings believe controlling Vicky is the key to winning the coming war for the human realm.

Despite the forces pulling her apart, Vicky needs all her wits about her. The demons of Hell are growing bold and she can barely keep up with the attacks plaguing the city: sirens in the Mystic River, goblins snarling traffic on Storrow Drive, imps tearing the gold from the State House dome. As the signs of war multiply and Hell threatens to overrun its boundaries, Vicky finds herself torn between her duty to save the world and her desire to save something of herself…

In celebration of the release of Firestorm, the publisher is giving away a paperback copy of the first Deadtown book,  Deadtown to one (1) lucky commenter. To enter, please fill out the Rafflecopter form AND leave a comment at the end of this post answering: Who is your favorite UF kicka$$ heroine?? Winner(s) chosen at random from all eligible entries. This contest is open to U.S. and Canadian mailing addresses only, where not prohibited by law. Open to participants, 18 years or older, who are legally allowed to participate in such a contest as allowed by their local laws. All federal, state, local, and municipal laws and regulations apply. Void where prohibited. No purchase necessary. By participating in the contest, participants agree to be bound by the decisions of the contest sponsor. Prize will be delivered by the contest sponsor. This blog, its reviewers, and the owner are not responsible for items lost in the mail. By entering this giveaway, participants agree to abide by these terms..

One response to “Review + Giveaway: Firestorm by Nancy Holzner”