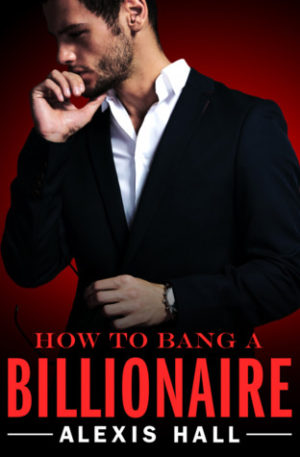 How To Bang A Billionaire
Author: Alexis Hall
Reviewer: B.
Rating: A+

Beginning with an enigmatic and somewhat dark farewell, How to Bang a Billionaire explores the inception of the “arrangementship” between Arden St. Ives, imminent graduate of Oxford University, and Caspian Hart, billionaire, immovable personality, and magnet to Arden’s desires. Both men are contradictions—Arden for being completely undone by his own honesty while trying to be someone else, and Caspian for only coming off as “monstrous” while acting on his determination not to be a monster. This would be enough of a puzzle to draw me in, regardless, but there are many other things to consider here, as well.

Alexis Hall is one of my all-time favorite authors, and is among the most gifted writers I’ve ever had the pleasure of reading. By the time I’ve finished, his books are nearly always covered in highlights (if electronic) or filled with random bits of paper (if in print) which I’ve shoved in at the binding to mark all the things I don’t want to forget. Unsurprisingly, I think How to Bang a Billionaire is a fantastic story, interweaving science, history, philosophy, art, humor, hurt, and sex into a narrative that I found beautiful.

For all the above attributes, How to Bang a Billionaire is also incredibly romantic. Arden occasionally envisions his reactions through an old-Hollywood lens, complete with Hepburn smiles, the “flare of amber” warming Caspian’s face in the dark, and so on. Caspian, by contrast is likened unto the harsh inflexibility of metal:

“Sculpted in silver and steel, a man so coldly perfect he was barely real at all.”

And yet, it is Caspian’s unexpected laughs and bashful grins, and especially the hungry growls and unraveling control, that threaten to steal Arden’s heart completely. Later, it gets even better as they negotiate needs and boundaries, and how much of themselves they might be able to give. There are more than a couple of swoony moments, without a single “precious” in sight.

I still tend to skip reviewing the sexual relationships in many of the books I read, but that wouldn’t be right in this case. There’s a lot going on sexually in How to Bang a Billionaire, but Caspian’s struggle with the connection of sex to self, and the importance of being honest about that, was both frustrating and heartbreaking. Additionally, the narrative is prefaced with what appeared to me to be a misunderstanding of need, and the rest of the story is filled with Arden’s fantasies of submission as well as Caspian’s battles with his own ideas of control. As a result, there’s a haunting fragility to some of their interactions that made the potential for things to fall apart almost painful.

Once again, Alexis Hall has crafted a story that ensnared me from the beginning. As the sole narrator of How to Bang a Billionaire, Arden is charming and sweet, but I think he shines most brightly when he fights for himself—when he begins to acknowledge that he is worth more. Caspian is devastatingly conflicted, and I very much wanted him to find his way, not only for Arden’s sake, but his own as well. While I believe this is a remarkable start to the Arden St. Ives series, I’m already as nervous as I am excited about what’s to come.

If England had yearbooks, I’d probably be “Arden St. Ives: Man Least Likely to Set the World on Fire.” So far, I haven’t. I’ve no idea what I’m doing at Oxford, no idea what I’m going to do next and, until a week ago, I had no idea who Caspian Hart was. Turns out, he’s brilliant, beautiful . . . oh yeah, and a billionaire.

It’s impossible not to be captivated by someone like that. But Caspian Hart makes his own rules. And he has a lot of them. About when I can be with him. What I can do with him. And when he’ll be through with me.

I’m good at doing what I’m told in the bedroom. The rest of the time, not so much. And now that Caspian’s shown me glimpses of the man behind the billionaire I know it’s him I want. Not his wealth, not his status. Him. Except that might be the one thing he doesn’t have the power to give me.