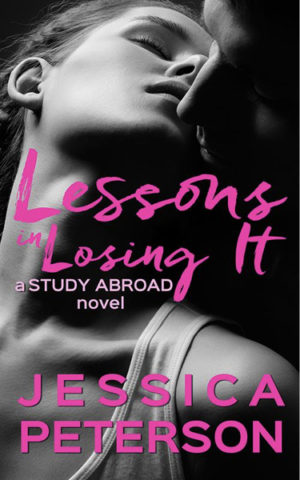 I’m not even going to pretend I’m confused by how awesome Jessica Peterson’s Lessons in Losing It was. It was fabulous. The fourth title in the Study Abroad series is—like the other books—able to be read as a standalone (although I suggest reading them in order because there are characters mentioned from previous titles and they make a bigger impact if you’ve read them).

There’s a special place for authors who write books about hot soccer players. Choirs of angels sing there and inspire them to write more books. I’m super sad this is the last Study Abroad title, but the back matter said there MIGHT be a spin-off series. **crosses all the things** I really like Ms. Peterson’s voice and the way she tells a story. The first person, present tense, POV is well-done and doesn’t irritate my soul. She remains solidly in one POV—even though they alternate—in each section. And, it’s truly great to get perspective from both main characters.

Rachel is an ambitious woman who knows what she wants from life—professionally. It’s easy to choose what we want to do in life, but who we want to be is a little more difficult. The biggest question is who we want to spend our lives with, sometimes. When the brain overrides the heart? Well, that gets messy. My takeaway from Rachel’s character: don’t let anyone tell you who—or what—to be. It sucks way less that way.

Fred? OMG. Be.Still.My.Heart. He’s such a sweetheart! I fell for him almost immediately. The way he was so honest with himself—and Rachel—instantly endeared him to me. Mostly because I want to believe I can be as authentic as he is. Fred is a great character because of his brutal honesty. Sometimes, it really sucks—if one reads to see truth—but it’s all good. He’s a true introvert and it isn’t often we see them accurately portrayed.

I loved Fred and Rachel. There was something comfortable and unpretentious about them. Natural. Neither felt the need to be someone they weren’t when they were together. THEY were refreshing. And get a fire extinguisher, because they.are.hot!

I look forward to reading more by Ms. Peterson in the future, and have thoroughly enjoyed her Study Abroad series. While all four titles can stand alone, I think they’re best read in order. The first title of the series, Spanish Lessons, is available gratis.

That’s all soccer star Fred Ohr wants to be with Rachel Collins, the American student he meets at party in his adopted hometown of Madrid. He’s looking for the real deal—someone who’ll stick around Spain for more than a semester—so he resolves to keep her at arm’s length. Even if she is sexy as hell. Smart. And as crazy about sports as he is.

But friends don’t kiss. They don’t do sleepovers. And they definitely don’t get rug burn from having the best sex ever on the living room carpet.

Fred and Rachel’s connection is instant. Intense. He loves to cook breakfast for her. She loves it when he cooks wearing nothing but his glasses.

Only Rachel’s got a dream internship waiting for her back in the states. And Fred is lining up a contract worth millions to stay in Madrid. They’re playing with fire to keep seeing each other like this. But how can they resist when the sex is so great—really, really freaking great—and the fun they have together is even better?