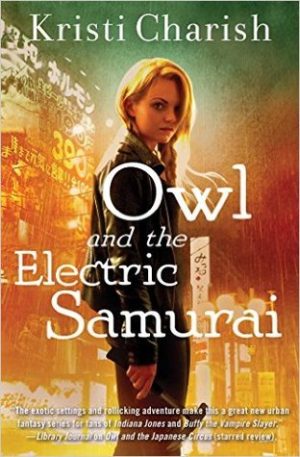 I have missed the adventures of Owl.  I don’t know why it feels as if it has been years since I’ve read Owl and the City of Angels but I was excited to finally know what happens next.  Owl and the Electric Samurai did not disappoint!

When we last saw Owl, she had lost custody of her beloved Mau cat, Captain, to Lady Siyu, while also receiving a mysterious offer from the IAA. I had no idea what to expect when I started on this novel, but watching Owl trying to actually track down Shangri-La and prevent IAA from getting their hands on the World Quest game developers was more than I imagined.  Though she has questionable morals at times, Owl’s heart is in the right place and she does strive to do the right thing.  Though the right thing is not always something you can live with, nor what you end up with – no matter how hard you try.

While Owl is trying to find and help the gamers, the red dragon sends her on an errand for the elves – to find a magical armor that has been lost for centuries.  As she starts out on the journey, Rynn and Owl are aware of the supernatural politics – the war between supernaturals remaining myth or being revealed.  However it seems there is much more going on than it appears and no one can be trusted.

I enjoyed the emotional rollercoaster that seemed to permeate this novel.  As Owl and Rynn’s relationship progresses, there are still bumps and adjustments along the way.  Though, it seemed working with your significant other has benefits – it also has drawbacks.  I enjoyed the give and take between them.  I liked how they made a better team as they both learned to trust each other.  I did miss Nadya as she was off solving a problem at her club.

The novel ends with a tremendous cliffhanger, one that has me emotionally in knots, especially after the epilogue.  I’m left with so many questions, but I don’t want to voice them as they could spoil.  Suffice to say, I wonder what is in store for Owl next, and if we will see what happens to several others in the next novel.  This novel felt almost even more gripping with the strain between Rynn and Owl, the race to find the armor as well as Shangri-La, worrying over what is going on with Nadya, and wondering who is pulling the mercinaries and IAA’s strings.  If you enjoy snarky heroines, quirky characters, gripping action and adventure, wrapped up with ancient supernatural mysteries, this is a series to read.

The International Archaeology Association (IAA) is responsible for keeping all things supernatural under wraps. They’re also responsible for ruining the promising archaeology career of Alix Hiboux, better known as Owl.

Needless to say, Owl’s still a little sore about that.

Just to keep Owl’s life lively, the IAA has opened a bounty on the two designers of World Quest, the online RPG that is much, much more than it seems. Owl needs to locate the notorious gaming duo before the other mercenaries do. But finding the gamers won’t be easy since every clue points to them hiding out in the legendary lost city of Shangri-La. Not to mention that the last time Owl and the game designers spoke, their conversation didn’t exactly end on the best note…

Meanwhile, undercurrents of supernatural politics are running amok in Tokyo, dragging Owl and her friends into a deadly game of wits with an opponent who calls himself the Electric Samurai. The cost of losing? All-out civil war between two powerful supernatural factions.

All in all, just another great day on the job.