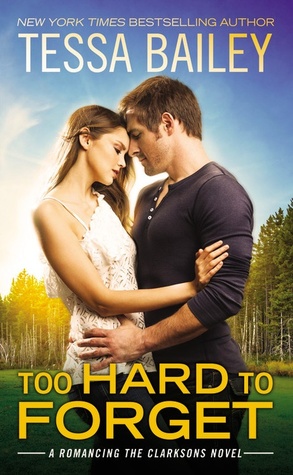 I may have devoured Peggy’s story in one sitting. I may have actually re-read parts, too. When reading the Romancing the Clarksons series by Tessa Bailey, I’m entranced by the familial connection, the depth of the characters, and the build up to the next book, Too Beautiful to Break—Belmont & Sage’s book. While we’re three-deep in the series already, if one were to jump in right here, there’s some lost backstory and outcomes for two other siblings—and the buildup to the final title in the series—but it could be read on its own. Readers will most likely devour not only this title—Too Hard to Forget—about the little sister, Peggy, and her football coach paramour, Elliott.

Who doesn’t like a well-crafted second chance story? I know I **really** like them, and Peggy & Elliott’s story was no exception.

Seems like I’m running across more and more titles that push my boundaries as a reader—which is cool. It’s no secret I’m a teacher, and I have some personal rules, if you will, about my reading. I am very careful about teacher/student titles because there’s a squick factor for me that I can’t get around. Just the way I’m wired. Now, while Elliott is NOT one of Peggy’s college professors, he is employed by the university she attends and that’s grey zone for me. But, Tessa Bailey? I’ll forge on. You know, in the interest of dirty-talking, super sexy damaged dudes.

In the two previous titles of the Romancing the Clarksons series, Too Hot to Handle (Rita & Jasper) and Too Wild to Tame (Aaron & Grace), we see little snippets of Peggy—who she is, and how she handles watching intimacy. It was obvious for me that she had commitment issues, and in Too Hard to Forget we learn why. Thank the gods. Peggy’s backstory was killing me. I needed it, like, immediately after reading the first book in the series. For those that haven’t read the previous two titles in the series, the Clarksons siblings’ mother died. She kept a diary, and during each leg of this journey they’re taking across the country to do a polar bear dip in the Atlantic Ocean—at her behest—a different sibling learns what their mother thought about them. What she saw beneath the layers.

For some reason, Peggy intrigued me from the beginning. And I think that what really drew me to her as a character was that she had unfinished business from her college days. Yeah, yeah. I know. Mental health professionals everywhere are going to roll their eyes at what I’m about to say: Peggy’s experience—as crappy as it was—with Elliott shaped her into who she is. It gave her the ability to be able to communicate authentically with Elliott’s daughter. It gave her insight into being the cheerleader yet not feeling as though she completely fit in (oh. Heroes flashback…).

Elliott was in a horrible position when he first met Peggy. His inner conflict made my heart break for him. Moving to present day, he has to exorcize the demons he’s saddled himself with in the interim. One thing I really liked about Elliott’s characterization was that he was Catholic and that figured into his conflict. While I’m not Catholic, I do know a lot about the religion as I taught in Catholic schools for 14 years. Broaching religion as a conflict point is always dicey for an author, and Ms. Bailey handled it in a way that wasn’t as intense as a Dan Brown book (remember the self-flagellation and the cilice Silas used in the DaVinci Code?), but I think it was more emotionally telling, regarding Elliott’s character. And, when Elliott has his AHA moment? There may have been actual tears, you guys.

There’s a bit of an age difference between Peggy and Elliott, too. Elliott has a daughter and I think part of the reason I really connected with Peggy during Too Hard to Forget was because she had to forge a relationship with the other important person in Elliott’s life as a stepmother. I liked the way Peggy went about this. Teens have a life full of angst anyway, and adding someone else to the mix isn’t always easy. I think Peggy filled a gap neither Elliott nor his daughter knew they had in their lives. But, it wasn’t in a mom-like way. Does that make sense?

The last thing I want to talk about is the super hot sexytimes. O.M.G. Peggy and Elliott surely melted my e-reader (Really. I would’t have been surprised if I’d needed to make some magic happen or pick up a new device because it short-circuited due to the HOT factor). While some of the interactions were raw and intense, there was a balance—and I appreciated that, as I need to see the intimacy to believe a couple is worthy of their HEA.

Readers of the Romancing the Clarksons series won’t be disappointed by Peggy & Elliott’s story, and the additional bites of Sage & Belmont tossed in definitely ramp up the frenzy to get their book in September (September? Is it September yet?!?). Those who haven’t jumped into the crazy road trip that is Romancing the Clarksons will enjoy this story, but will likely want to pick up the two previous titles in the series. And foam at the mouth like I am in anticipation for Belmont’s book.

Peggy Clarkson is returning to her alma mater with one goal in mind: confront Elliott Brooks, the man who ruined her for all others, and remind him of what he’s been missing. Even after three years, seeing him again is like a punch in the gut, but Peggy’s determined to stick to her plan. Maybe then, once she has the upper hand, she’ll finally be able to move on.

In the years since Peggy left Cincinnati, Elliott has kept his focus on football. No distractions and no complications. But when Peggy walks back onto his practice field and into his life, he knows she could unravel everything in his carefully controlled world. Because the girl who was hard to forget is now a woman impossible to resist.