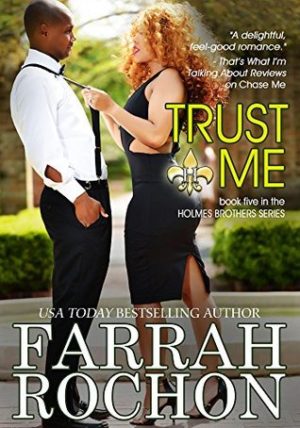 At one point, Mackenna (Mack)Arnold was one-half of New Orleans’ Power Couple. But after 15 years of problems and lies, she left her husband. Now she sits on the New Orleans City Council, dedicating her time to helping the city she loves. Unfortunately, her best friend’s little brother, Ezra Holmes, an investigative report, has set his sights on uncovering supposed corruption in Mack’s office.

Ezra Holmes is a conflicted, even troubled man. The woman he’s crushed on for years may be using her position on the City Council to line her pockets. Also, he recently trusted the wrong source, costing him his job with the newspaper. So instead of making his way onto the national news spotlight, he’s teaching journalism at a local college. When Mack approaches him about possible corruption in the mayor’s office, he isn’t sure if he can put aside the past and trust that she’s not in it for her own, selfish reasons.

The aptly named Trust Me is another entertaining story in Ms. Rochon’s Holmes Brothers series. The book is a standalone romance and story; however, we were introduced to the two main characters in the previous book, where their conflict first came to light. This title is a bit more serious and has a more of an edge to it than the prior title, which took place during a family vacation. I liked the change in scenery and tone; although I worried a bit how the characters would get their “happy ending” with so much at stake.

Ezra’s obsession with Mack was a little creepy at the start. The man was determined to prove she was crooked, even while day dreaming about her fine body and beautiful face. I attribute his behavior to a classic case of never being noticed by Mack all those years his sister brought Mack home with her during college. Whether it was misplaced anger or the only way he felt he could “be with her,” I was disturbed by his driven nature to find her guilty. So it was a big relief that the author addressed the issue early in the book, putting the pair on the same page.

Although Mack and Ezra shared a passionate desire, they were both extremely cautious with their hearts. Trust was difficult and was only earned as the book progressed. There was a lot of back and forth; give and take. Additionally, Ezra had concerns over a conflict of interest sleeping with a source/politician. Working through their rough spots gave the story a more serious tone, yet made their eventual union more fulfilling. And the somber storyline the pair worked on only added to the tone.

Overall, Trust Me is an entertaining read. With the darker storyline of corruption, I wondered how it would resolve; I was expecting a blowup, but was pleasantly surprised. Ms. Rochon created a beautiful love story from a place of suspicion and mistrust. Trust Me, and the rest of the Holmes Brothers series, makes for an enjoyable summertime read.

As the maverick of the New Orleans City Council, Mackenna Arnold has spent the last four years dismantling the council’s “politics as usual” mentality. Never one to shy away from a challenge, Mack now has her sights set on an even bigger prize: the mayor’s office. But only when the time is right. And only if she can get the pesky freelance journalist hell-bent on investigating her for corruption—who just so happens to be one of the sexiest men alive and her best friend’s younger brother—off her back. But when Mack suspects that her longtime mentor and the city’s current mayor is up to no good, she must convince Ezra Holmes to help her investigate the mayor’s office.

Ezra can admit to having had a thing for Mackenna in his younger days, even though she barely knew his name back then. But his past feelings for Mack have nothing to do with why he’s so committed to exposing her. He suspects she’s used her influence as a public official to cut private deals, and breaking this corruption story would be just the thing to jumpstart his fading career. But what is Ezra supposed to do when he discovers Mack isn’t the one who’s a crooked politician? There’s only one thing he can do: join forces with the woman he’s been crazy about for far too long.

Reviews in the Series:
Chase Me by Farrah Rochon (Holmes Brothers #4)