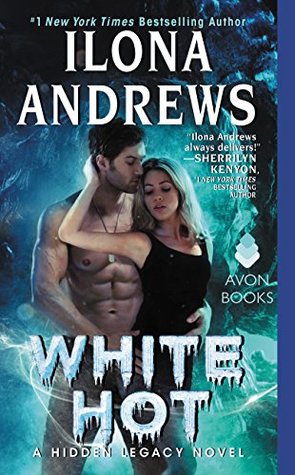 White Hot is the second story in the Hidden Legacy series, building upon the exciting escapades of Nevada Baylor. This is NOT a standalone book. The series, a mix of urban fantasy and romance storylines, is set in an alternate Houston, where magic (psychic powers) is prevalent in some families. If one is powerful enough, s/he is designated Prime. Have enough Primes, and your family is a House. We learned in the previous book, Burn for Me, that a faction of powerful, secretive Primes/Houses is trying to disrupt status quo and create confusion in Houston; however Nevada and Rogan can’t figure out the “why.”

White Hot is an excellent story, not suffering any “sophomore slump.” Everything literally explodes open. We learn so much about Nevada and her true nature. Her powers are strong, something she’s been hiding her whole life, and with time and training, she could be extremely dangerous. Also, Nevada and Rogan have discovered more about the mysterious plot to create chaos in the Houston/Texas region. They are getting closer to the truth, but much remains to uncover and learn. However, now that their enemies realize what a powerful team they make, things will only become more difficult! Additionally, there is a new enemy on the horizon, someone that threatens Nevada’s family.

The overall and book-specific stories are both equally engrossing. The layers and complexity make the book fascinating rather than confusing. The conspiracy and plot are smart and interesting. The action is solid and edge-of-your seat. I loved seeing all of Nevada’s family join the fight, and learning about the hidden talents of her sister and cousin. She’s a good leader and compassionate soul. But she’s willing to make hard choices to protect what is hers. I love that she is also becoming a strong kickass heroine; growing, learning.

The romance between Nevada and the little understood Rogan also blossomed during White Hot. Rogan continued his relentless pursuit, but also opened up to Nevada, realizing she can match him. She may not be his equal, and he sometimes does things to “protect” her which only frustrated her, but he’s learning how to allow her to make her own decisions. He is realizing if he supports her, she’ll come to him; trust him. There are sexy times, filled with emotions that made my belly flutter. They are a great match, and I hope the authors allow us to see what happens to them down the road. There are many hurdles to jump, and I really want them to make it.

I look forward to discovering more about Nevada, seeing her in action, learning of her decisions, and watching her fall in love. I cannot believe there is only one book left in this thrilling series.

Nevada Baylor has a unique and secret skill—she knows when people are lying—and she’s used that magic (along with plain, hard work) to keep her colorful and close-knit family’s detective agency afloat. But her new case pits her against the shadowy forces that almost destroyed the city of Houston once before, bringing Nevada back into contact with Connor “Mad” Rogan.

Rogan is a billionaire Prime—the highest rank of magic user—and as unreadable as ever, despite Nevada’s “talent.” But there’s no hiding the sparks between them. Now that the stakes are even higher, both professionally and personally, and their foes are unimaginably powerful, Rogan and Nevada will find that nothing burns like ice …

Reviews in the Series:
Burn for Me by Ilona Andrews (Hidden Legacy #1)