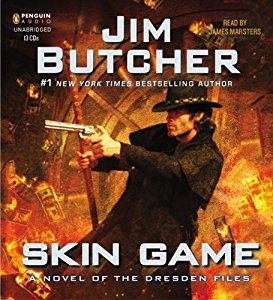 Skin Game opens with Harry on Demonreach, a place he’s been living alone for the past year. He can’t leave until he removes the parasite from his head, and it’s clear that Mab has been running interference when he tried to reach out to his friends. Harry spent the time learning more about his new job as the prison warden and perfecting his parkour moves. When Mab finally shows up, she tells Harry his next task is to work as her emissary helping Nicodemus.

I have always been a bit fearful of the stories revolving around Nicodemus and the Blacken Denarius. The stories tend to be a bit darker, and Skin Game is no exception. However, I have to say that even with my initial apprehension and the terrible violence of the book, I think this was my favorite Blacken Denarius story. The book is filled with plot twists and gritty action, but also tender moments (Harry and Maggie finally connect!!) and Harry’s trademark humor.

Overall, I enjoyed Skin Game. There were great highs, but some very dark lows. The darkness of the mood and malice found in several scenes was a bit much for me at times. I loved several of the changes; most notably what happens with Butters, the changes between Karen and Dresden, and Harry uniting with Maggie. I also loved the addition of Goodwin Gray and Hades, and would love to see them again in future titles. Harry is finding his way again, learning to trust both himself and his friends. There was a lot of positive emotions in the underlying storyline message. But the gruesome scenes were hard to handle at times.

James Marsters turns in another amazing performance. Expanding his cast of voices with the addition of several new characters. The voice for the evil forest creature was ominous and dark, the voice for mercenary Gray was laid back and charming. Perfect.

Now that I’ve finished Skin Games, I’m 100% caught up and have nothing new. With the delayed and unknown release date for the next title, I’m a bit sad.